“Even among such an superb cast, Lisette Oropesa stood out: her striking performance as Amalia demonstrated that she has graduated fully from soubrette roles to more demanding lyric ones without losing any of the astonishing flexibility of her voice. Equally comfortable in arias and cabalettas, she moved effortlessly between nimble, fluttering coloratura and arching lyrical phrases.”

“Lisette Oropesa made a rapturous house debut, investing Amalia with depth, authenticity and allure, and streaming through this fluttering Jenny Lind role with disarming ease. As a result, this usually drab heroine became the production’s unlikely pillar.”

“Her beaming smile and sparkling voice lit up the stage every time she came on.”

“A light lyric soprano with a full arsenal of bel ­canto effects at her disposal, she wields a ­distinctive, bell-like timbre that is instantly appealing”

“Operas are not a one-person show, ever. They are the result of many talented, dedicated contributors. So, I feel guilty raving about one team member in particular, but I am going to rave about Lisette Oropesa, right now, right up front for everybody to see…When she appeared for the first time Saturday night in Pittsburgh Opera’s Don Pasquale, the impact was even greater than the change from black/white scenery to color suggested; like a light bulb, the life in the performance came on, Donizetti meets star power. There were other excellent performances and other important good stuff to talk about, but let’s get the ‘why you must not miss this performance’ out of the way up front. Pittsburgh, go see and hear Lisette Oropesa while you can.”

“There are some voices in opera that are so sublimely expressive that they stand out like a Michelangelo fresco in a black and white film. Pittsburgh Opera’s season finale production of Donizetti’s “Don Pasquale” features such a voice…Ms. Oropesa’s career is likely poised to blossom in the coming seasons.”

In the 2021-22 season Lisette appears at Royal Opera House – Covent Garden as Gilda in a new production of Rigoletto to open their season, and returns for several performances of La Traviata in the fall. She then embarks on a European tour in concert performances of Handel’s oratorio Theodora, performing in Vienna, Milan, Paris, Luxembourg, and Essen. Next she heads to Teatro alla Scala, starring as Giulietta in a new production of Bellini’s haunting I Capuleti e i Montecchi, followed by Fiorilla in a revival in Munich of Il Turco in Italia. From there, she leads two productions at the Wiener Staatsoper: Konstanze in Die Entführung aus dem Serail and the title in Lucia di Lammermoor. Lisette then brings her acclaimed Lucia to the Opernhaus Zürich, in her house debut. She then returns to Munich to perform La Traviata. After the summer of 2021, Lisette makes her anticipated house and role debut as Elvira in I Puritani at the Teatro di San Carlo in Napoli.

In concert, Lisette debuts a special evening of Zarzuela arias at the Teatro de la Zarzuela in Madrid, and also in Seville. She debuts in bel canto concerts in Martina Franca, Catania, and at the series Grandes Voces in Madrid. Song recitals bring her to Prague, Parma, Vienna and more.

Lisette began her career at the Metropolitan Opera, and has starred in various roles there, including Manon Lescaut in Manon, Violetta Valery in La Traviata, Nannetta in Falstaff, Gretel in Hansel and Gretel, Gilda in Rigoletto, and Susanna in Le Nozze di Figaro.

She has a strong relationship to Spanish theatres such as the Teatro Real and the Grand Theatre del Liceu where she has sung in La Traviata, Lucia Di Lammermoor, Rigoletto, and Rodelinda.

She has appeared many times with the Bayerische Staatsoper as Konstanze in Die Entführung aus dem Serail, a role she has also sung at the Opéra National de Paris. Her most performed role is Gilda in Rigoletto, which she has sung at the Dutch National Opera, Teatro dell’opera di Roma, Los Angeles Opera, the Metropolitan Opera, Opéra National de Paris, and the Teatro Real. In the U.K., Lisette triumphed as Norina in Don Pasquale at Glyndebourne, and as Lucia di Lammermoor at the Royal Opera House, Covent Garden.

In the U.S., Lisette has appeared at the Met, San Francisco Opera, Los Angeles Opera, Philadelphia Opera, and the Washington National Opera, among others. Lisette’s career also includes oratorio, recital, and concert repertoire. She has released two recital albums, titled Within/Without, and Aux Filles du Désert, and has performed recitals in New York City, Washington, DC, Los Angeles, and more. She has a released a Mozart concert aria album called Ombra Compagna and in concert she has appeared with the Philadelphia Orchestra, the Chicago Symphony, the Cincinnati Symphony Orchestra, the Concertgebouw in Amsterdam, among others. She has sung at Carnegie Hall, the Accademia Nazionale di Santa Cecilia in Rome, The Ravinia Festival, The Tanglewood Music Festival, The Chicago Bach Project, The Mostly Mozart Music Festival, and more. She has collaborated with many of the world’s leading conductors, including Riccardo Muti, Yannick Nézet-Séguin, Anthony Pappano, Daniele Gatti, Fabio Luisi, Ivor Bolton, William Christie, and many more.

Lisette was born in New Orleans, Louisiana, to Cuban parents, and played the flute for 12 years and she began her studies in vocal performance at Louisiana State University. After winning the Met Opera National Council Auditions, she entered the Lindemann Young Artist Development Program and moved to New York City. She sang her first major role, Susanna in Le Nozze di Figaro, at the Met at the age of 22, and has sung there in over 100 performances in many different roles since. She has appeared in concert halls and opera stages all over the world since graduating from the young artist program in 2008, and has become one of the most celebrated singers of her generation, both for her singing and her inspiring personal story. Lisette is a devoted runner who has completed 6 marathons and is an advocate for health and fitness. 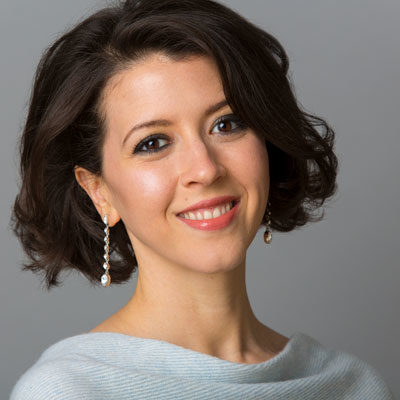 Review: In ‘Manon,’ a Soprano Charms Her Way…