“Babayan favors a playing style that speaks to the senses, to the range of his love for the music, which is unsurpassed. An enthusiastic multi-instrumentalist, tirelessly studying the works of his predecessors as if they were his contemporaries, he does not hide himself from this nearly obsessive research of a spiritual music, which comes close to magic.”

“Babayan exuded the gravity of a monumental sculpture in bronze, as he teased out the beauties of this more ruminative work.”

“…if your expectation is that this will be pretty special, you are right. This recording is the culmination of a series of live performances Babayan and Argerich have given over the last few years, starting at the Lugano Festival in 2013, and the sense of a rock-solid musical partnership is palpable…The emotional climax is, not surprisingly, the lovers’ farewell, which, in this performance, is intensely moving but also icily brilliant, particularly in the final pages.”

“Sergei Babayan brought consummate technique and insight to the cryptic Fifth Concerto, another work in which Prokofiev’s Neo-Classical approach is rendered Modernist, even baffling, through fragmentation and harmonic strangeness. The intrepid audience awarded hearty ovations to every pianist. Hopefully it won’t take another marathon to hear the overlooked, underrated concertos.”

Sergei Babayan is one of the leading pianists of our time: Hailed for his emotional intensity, bold energy and remarkable levels of color, Sergei Babayan brings a deep understanding and insight to an exceptionally diverse repertoire. Le Figaro has praised his “unequaled touch, perfectly harmonious phrasing and breathtaking virtuosity.” Le Devoir from Montreal put it simply: “Sergei Babayan is a genius. Period.”

Sergei Babayan has collaborated with such conductors as Sir Antonio Pappano, David Robertson, Neeme Järvi, Yuri Temirkanov, Thomas Dausgaard, Tugan Sokhiev, and Dima Slobodeniouk. Over the years, Babayan has performed with Valery Gergiev numerous times to great critical acclaim, including appearances at the International Festival “Stars of the White Nights”, the Moscow Easter Festival, the Barbican Centre with Maestro Gergiev conducting the London Symphony Orchestra, in St. Petersburg’s Mariinsky Theatre, the Great Hall of the Moscow Conservatory, Théâtre des Champs-Elyseés in Paris, at the Salzburg Festival, and at the Rotterdam Philharmonic-Gergiev Festival, where Babayan was artist-in-residence.

Sergei Babayan is a Deutsche Grammophon exclusive artist; his latest release ‘Rachmaninoff’ (DG 2020) was hailed by the international press as a groundbreaking recording and received numerous awards including BBC Recording of the Month and CHOC Classica (‘This musical journey, born out of a limitless imagination and thought in minute detail, is one big masterpiece.’) His previous DG release of his own transcriptions for two pianos of works by Sergei Prokofiev, with Martha Argerich as his partner (‘Prokofiev for Two’; DG 2018), was praised by reviewers as ‘the CD one has waited for’ (Le Devoir), an ‘electrifying duo that leaves the listener in consternation’ (Pianiste). Mr Babayan’s performances have been broadcast by Radio France, BBC-TV and BBC Radio 3, NHK Satellite elevision and Medici TV. 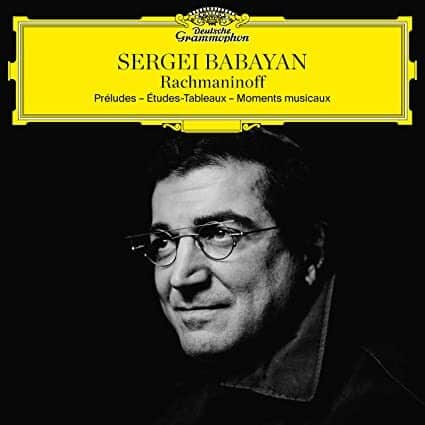