The Philharmonia Orchestra creates thrilling performances for a global audience.

Founded in 1945, in part as a recording orchestra for the growing home audio market, the Philharmonia has always pioneered the use of technology to reach broader audiences for orchestral music. During the Coronavirus pandemic, it has continued to create outstanding performances, experienced online by lifelong fans and firsttime listeners on five continents.

The Philharmonia’s home is Southbank Centre’s Royal Festival Hall, in the heart of London. It has been Resident Orchestra there since 1995. The Orchestra is also resident at venues and festivals across England: Bedford Corn Exchange, De Montfort Hall in Leicester, The Marlowe in Canterbury, Anvil Arts in Basingstoke, the Three Choirs Festival in the West of England, and Garsington Opera. Central to all its residencies is a Learning & Engagement program that empowers people to engage with, and participate in, orchestral music.

The Philharmonia is a registered charity. The organization relies on income from a wide range of sources to deliver its program, and the Orchestra is proud to be generously supported by Arts Council England. During the Coronavirus pandemic, it has received a grant from the Cultural Recovery Fund, along with support from individual donors, corporate sponsors, and from the many audience members who chose to donate the value of their tickets for cancelled concerts. This has enabled it not just to survive, but to create new online experiences for its audiences, and to support its fantastic players.

Principal artists
Finnish conductor and composer Esa-Pekka Salonen has been the Philharmonia’s Principal Conductor & Artistic Advisor since 2008. Fellow Finn Santtu-Matias Rouvali takes over from Salonen as Principal Conductor in the 2021/22 season, after four years as Principal Guest Conductor. Santtu is known for his expressive, balletic conducting style and irrepressible energy. “The Philharmonia players have spoken of the “pulse” the conductor seems to generate, and there is a palpable lift-off from his downbeat” (The Times).

Under Salonen and other key conductors, the Philharmonia has created a series of critically-acclaimed, visionary projects, distinctive for both their artistic scope and their depth of live and digital content. In 2019, Salonen presented Weimar Berlin: Bittersweet Metropolis, an exploration of the Weimar Republic era through the prism of its music, drama and film. His planned 2020/21 series focussing on music inspired by Greek mythology into a complete performance of Beethoven’s ballet The Creatures of Prometheus. Narrated by Stephen Fry, with animation by Hillary Leben, and filmed at Battersea Arts Centre in London, this stunning concert was broadcast for free on YouTube.

In January 2021 the Orchestra announced a new Artist in Residence collaboration with House of Absolute. This collective of eight multidisciplinary artists works in hip hop and other contemporary dance styles, spoken word, writing, music production, visual and digital art. Both groups are excited about the genre-crossing live and digital performances this new relationship will bring.

Digital program, recording and broadcasting
The Philharmonia’s international reputation derives in part from its extraordinary recording legacy, which in the last ten years has been built on by pioneering work with digital technology. Two giant audio-visual walk-through 2 installations have introduced hundreds of thousands of people to the symphony orchestra. Its VR experiences, featuring music by Sibelius, Mahler and Beethoven and placing the viewer at the heart of the orchestra, have travelled to all the Orchestra’s UK residencies, and to festivals and venues around the world. In 2021, in a consortium led by the Royal Shakespeare Company and funded by the UK government’s Audience of the Future program, the Philharmonia present a new online interactive theatrical and musical experience, Dream, which uses the latest immersive technology to create interactive performances. The Orchestra has won four Royal Philharmonic Society awards for its digital projects and audience engagement work.

Millions of cinema-goers and gamers have experienced the Philharmonia’s music, as it is the go-to orchestra for many film and video game composers both in the UK and in Hollywood. Its musicians have recorded around 150 soundtracks – more recent work includes The Mummy, Baby Driver, and the video game 11-11: Memories Retold, and the Orchestra’s film credits stretch back to 1947. Its iPad app, The Orchestra, has sold tens of thousands of copies. The Philharmonia is Classic FM’s Orchestra on Tour and broadcasts extensively on BBC Radio 3.

The Orchestra releases live recordings of signature concerts with Signum Records, most recently the first recordings with Santtu-Matias Rouvali, of Tchaikovsky’s Swan Lake and Prokofiev’s Symphony No. 5 (available from March 2021). In 2020, to mark the 75th anniversary of the Orchestra, Warner Classics released Philharmonia: Birth of a Legend, a 24-CD set of the Orchestra’s early recordings. And they worked with the BBC and the Otto Klemperer Film Foundation to release a box set of Blu-ray discs of Klemperer’s Beethoven Symphony cycle, filmed live at the Royal Festival Hall in 1970. The Philharmonia’s vibrant YouTube channel has over 110,000 subscribers. It features full performances specially created for online viewing; archive performances; short films introducing the instruments of the orchestra used by teachers and students around the world; interviews with conductors, composers and soloists; and in-depth documentaries accompanying landmark series such as Weimar Berlin: Bittersweet Metropolis and Voices of Revolution: Russia 1917.

Global reach
Throughout its history, the Philharmonia has toured across Europe, Asia and America. Just before the Coronavirus pandemic brought the world to a standstill, in January 2020 the Philharmonia and Esa-Pekka Salonen had a residency at Tokyo Metropolitan Theatre, featuring concerts that were voted the ‘Best of 2020’ by Japanese music magazine Ongaku No Tomo, the Orchestra’s VR Sound Stage open for free to the Tokyo public, and another Philharmonia VR installation outside the venue.

Previous touring projects include a trip to the Canary Islands with Principal Conductor Designate Santtu-Matias Rouvali (January 2020); a major US tour (March 2019) with Salonen that featured two acclaimed performances at Lincoln Center, New York, and concerts at CAL Performances in Berkeley, California; and a tour to Colombia (January 2019) that included concerts, a Virtual Reality installation and education work with young musicians.

The Orchestra’s online performances in 2020 were watched by brand new Philharmonia fans in Brazil, Sudan, Indonesia, India, and high above the Arctic Circle in Norway.

In the US, the Orchestra’s American Patrons generously support the Philharmonia Foundation, which is a USregistered 501(c)(3) non-profit organization. The Foundation not only supports the Philharmonia when it tours to the US, but helps fund the performance of music to the highest quality in any part of the world. 3

History and people
The Philharmonia Orchestra was founded by EMI producer Walter Legge, and has worked with a who’s who of 20th- and 21st-century music. Herbert von Karajan, Otto Klemperer, Wilhelm Furtwängler, Arturo Toscanini and Riccardo Muti are just a few of the great artists to be associated with the Orchestra, and it has premiered works by Richard Strauss, Sir Peter Maxwell Davies, Sir Harrison Birtwistle, Errollyn Wallen, Kaija Saariaho and many others.

The Philharmonia’s Emerging Artists program develops the next generation of composers and instrumentalists. Composers’ Academy champions three developing composers each year. The Orchestra works with Esa-Pekka Salonen and the Colburn School in LA to deliver performance opportunities and training for talented young conductors on the conservatory’s conducting program. The Philharmonia MMSF Instrumental Fellowship Program supports instrumentalists seeking an orchestral career, and aims to increase diversity within the classical music industry.

The Philharmonia is a team of 80 world-class musicians from 16 countries. They look forward to bringing music into your life, through great concerts and ground-breaking projects, for the next 75 years and beyond. 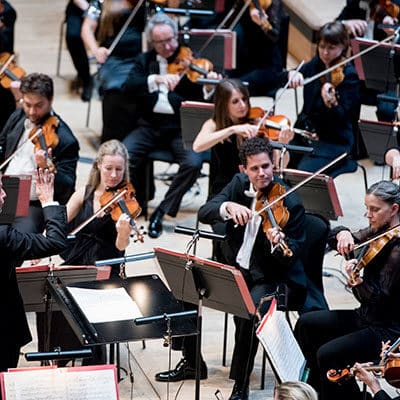