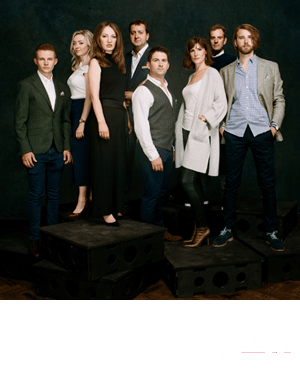 “The singing of VOCES8 is impeccable in its quality of tone and balance. They bring a new dimension to the word ‘ensemble’ with meticulous timing and tuning.”

“The slickest of the lot…fans of a cappella ought to hear this.”

“A perfect blend of calm contentment and soaring spirit.”

“”Radiant” and “luminous” are adjectives that are perhaps overused in describing choral sound, but in this case they are fully deserved.”

The 2023 Grammy-nominated British vocal ensemble VOCES8 is proud to inspire people through music and share the joy of singing. Touring globally, the group performs an extensive repertory both in its a cappella concerts and in collaborations with leading musicians, orchestras, conductors and soloists. Versatility and a celebration of diverse musical expression are central to the ensemble’s performance and education ethos which is shared both online and in person.

VOCES8’s entrepreneurial and community spirit and its innovative approach are fostered by Co-Founders Paul and Barnaby Smith. The Covid-19 pandemic gave the impetus for VOCES8 to further transform its already exceptional offerings, nurturing a new audience community providing hope, resilience and a chance to engage with classical music in new ways. Pioneering initiatives included the LIVE From London online festival and the VOCES8 Digital Academy.

LIVE From London was created as a specific response to the pandemic. Winning praise for its collaborative approach from artists, press and audiences around the world, the team has delivered seven digital festivals to date, broadcasting 90 concerts and selling 150,000 tickets in over 75 countries. The VOCES8 Digital Academy is an online choral programme for high schools, colleges and individuals featuring live interaction with members of the ensemble, live and recorded lectures, and video resources to learn and perform music from the renaissance to today.

Alongside this online work on its own platforms VOCES8 is heard regularly on albums, international television and radio. The ensemble is a Decca Classics artist and alongside that releases projects on its own label, VOCES8 Records. The latest Decca Classics album is the Grammy Nominated “The Lost Birds” featuring music by Christopher Tin. New album projects for 2023 include albums with Eric Whitacre, Paul Simon, and Christmas arrangements for VOCES8 and orchestra by Taylor Scott Davis.

VOCES8 is passionate about music education and is the flagship ensemble of music charity the VOCES8 Foundation, which actively promotes ‘Music Education For All’. Engaging in a broad range of outreach work that reaches up to 40,000 people a year, the Foundation runs an annual programme of workshops and masterclasses at the VOCES8 Centre at St Anne & St Agnes Church, London. Dedicated to supporting promising young singers, the group awards eight annual choral scholarships through the VOCES8 Scholars initiative. These scholarships are linked to the annual Milton Abbey Summer School at which amateur singers of all ages are invited to work and perform with VOCES8. Through the separate VOCES8 USA Foundation there is another set of twelve talented Scholars.