“If there ever was a greeting card, picture-perfect production to see in Chicago during the holidays, it’s the Joffrey Ballet’s ‘The Nutcracker.’”

“…it stands to reason that history might remember Possokhov’s ‘Anna Karenina’ among the canon of what will, one day, be deemed 21st century classics…there’s no doubt that [the world] is a show piece for the Joffrey, who are truly deserving of an original ballet to call their own…From Edson Barbosa’s portrayal of the station guard which foreshadows Anna’s death, to the ballet’s jaw-dropping end with Arai, the ballet really showcases the depth of Joffrey’s talent.”

“…because the production [of Christopher Wheeldon’s Nutcracker] is so rich in history, so full of whimsy and fantastical happenings, so multilayered, and so deeply emotional, it has required multiple viewings to absorb it all, and to appreciate its nuances. And while it is a wonder-filled adventure for children (one that had several tots peering into the orchestra pit and snapping selfies as the musicians warmed up), for adults, the ballet serves as a poignant reminder of the fact that what really counts amid the whirl of holiday consumerism is family, friends and the work of artists, craftsmen and builders…the chief wonder among it all is the dancing.”

“The company is in splendid shape [in John Neumeier’s Orpheus and Eurydice], and Neumeier finds consummate use for it. The furies are beauteous monsters. The blessed spirits among whom Eurydice resides rise and float as if on the puffy cloud of Gluck’s famous flute solo.”

“Yes, “Bartok on Stage,” the latest collaboration between the Cleveland Orchestra and Chicago’s Joffrey Ballet, is a gloomy gem. For every shocking or illicit deed depicted on stage Thursday, there was a redemptive lovely gesture by a musician, dancer, or singer.”

“Depending on whose calendar you follow, the Joffrey Ballet is either 60 (in years since its founding) or 20 (the years it’s been based in Chicago). In either case, the company’s ultimate resilience as well as its growth in virtuosity is cause for celebration, and celebrate the happy audience at Zellerbach did.”

“The Joffrey Ballet’s appearance in Greenville Monday night offered a reminder of why this Chicago-based troupe often is ranked — with American Ballet Theatre and New York City Ballet — among the best dance companies in the nation. The Joffrey’s expressive dancers exhibited marvelous precision, control and artistry in three bold, abstract works by the innovative choreographers William Forsythe, Christopher Wheeldon and Edwaard Liang.”

“While I’ve raved about the choreography – and rightly so – I should be remiss not to mention the dancing, which was polished, moving and nuanced throughout. The Joffrey, celebrating its 60th year, has never looked better. Between the dancers’ artistry and the choreographers’ ingenuity, I left the theater feeling the future of ballet as an art form was, contrary to Homans’ dire prediction, quite assured.”

“Artistic director Ashley Wheater, who took over the company in 2007, has made a point of giving younger dancers a chance at bigger roles, so Detroiters should notice an invigorated spirit in the performances.”

“Ballet dancers lift each other all the time. But the elevation achieved in “Beyond the Shore,” the glowing highlight of the Joffrey Ballet’s weekend repertory at Berkeley’s Zellerbach Hall, seemed to untether one dancer from gravity itself.”

Classically trained to the highest standards, The Joffrey Ballet expresses an inclusive perspective on dance that reflects the diversity of America through its Company Artists, extensive repertoire, Academy, and Community Engagement programs.

Considered one of the premier companies performing today, the Joffrey plays a vital role in the dance community as the largest dance company and dance education provider in Chicago and the greater Midwest region.

MISSION
The Joffrey Ballet believes in the positive, transformative power of the arts. Our mission is to promote dance through an unwavering commitment to high-quality performances, education, and innovation.

As a member of Dance/USA, the national service organization for professional dance, The Joffrey Ballet has adopted Dance/USA’s statement on core values of equity and inclusion.

HISTORY
In 1956, a time during which most touring companies performed only reduced versions of ballet classics, Robert Joffrey and Gerald Arpino formed a six-dancer ensemble that toured the country in an old station wagon pulling a U-Haul trailer. 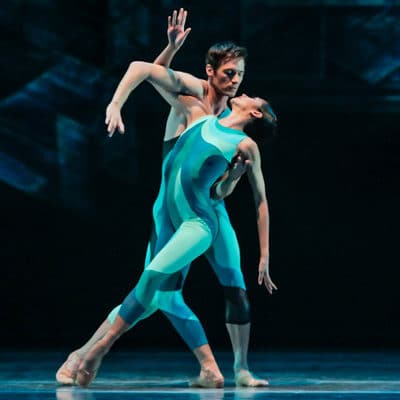