Patti LuPone is a three-time Tony Award winner for her performances as Joanne in Marianne Elliott’s award-winning production of the Stephen Sondheim George Furth musical Company, Madame Rose in the most recent Broadway revival of the Jule Styne-Stephen Sondheim-Arthur Laurents classic Gypsy and the title role in the original Broadway production of Andrew Lloyd Webber and Tim Rice’s Evita.

In addition to Company, her NY stage appearances include the Scott Frankel-Michael Korie-Douglas Wright-Michael Grief musical War Paint (Tony, Drama Desk and Outer Critics Circle Award nominations for Best Actress in a Musical);  Douglas Carter Beane’s new play Shows For Days, directed by Jerry Zaks at Lincoln Center Theater; her debut with the New York City Ballet as Anna 1 in their new production of The Seven Deadly Sins; Joanne in the New York Philharmonic’s production of Company; David Mamet’s The Anarchist;  and Lincoln Center Theater’s production of the musical Women on the Verge of a Nervous Breakdown, for which she was nominated for Tony, Drama Desk and Outer Critics Circle Awards.

Winner of the Tony, Drama Desk and Outer Critics Circle Awards for Best Actress in a Musical and the Drama League Award for Outstanding Performance of the Season for her performance as Madame Rose in the most recent Broadway production of Gypsy, her other stage credits include appearances with the Los Angeles Opera in their new production of John Corigliano’s The Ghosts of Versailles and Weill-Brecht’s Mahagonny (debut); the world premiere of Jake Heggie’s opera To Hell and Back with San Francisco’s Baroque Philharmonia Orchestra; Mrs. Lovett in John Doyle’s production of Sweeney Todd (Tony, Drama Desk, Outer Critics Circle nominations, Drama League Award for Outstanding Contribution to Musical Theatre); the title role in Marc Blitzstein’s Regina; a musical version of Lillian Hellman’s The Little Foxes at the Kennedy Center;  Fosca in a concert version of Passion, which was also broadcast on PBS’ Live From Lincoln Center; a multi-city tour of her theatrical concert Matters of the Heart; the City Center Encores! productions of Can-Can and Pal Joey; the NY Philharmonic’s productions of Candide and Sweeney Todd (NY Phil debut); and performances on Broadway in Michael Frayn’s Noises Off; David Mamet’s The Old Neighborhood; Terrence McNally’s Master Class; with her dear friend Mandy in An Evening with Patti LuPone and Mandy Patinkin; and in her own concert Patti LuPone On Broadway.

A graduate of the first class of the Drama Division of New York’s Juilliard School and a founding member of John Houseman’s The Acting Company in which she toured the country for four years, her subsequent New York credits include Dario Fo’s Accidental Death of An Anarchist; David Mamet’s The Water Engine, Edmond and The Woods; and Israel Horovitz’ Stage Directions and performances in the musicals Anything Goes (Tony Award nomination, Drama Desk Award); The Cradle Will Rock; Oliver!; Evita (Tony and Drama Desk Awards- Best Actress in a Musical); Working; and The Robber Bridegroom.

Since 2000 she’s appeared regularly at the Ravinia Festival. First in its Sondheim series when she starred as Mrs. Lovett in Sweeney Todd, Desiree in A Little Night Music, Fosca in Passion, Cora Hooper in Anyone Can Whistle, Madame Rose in Gypsy and in two different roles in Sunday in the Park with George. Her subsequent appearances there include a reprise of her performance in Heggie’s To Hell and Back, a concert performance of Weill’s The Seven Deadly Sins and starring in the title role in a concert production of Annie Get Your Gun.

In London, she won the Olivier Award for her performances as Fantine in the original production of Les Miserables and in the Acting Company production of The Cradle Will Rock. She also created the role of Norma Desmond in Sunset Boulevard, for which she was nominated for an Olivier Award, and recreated her Broadway performance of Maria Callas in Master Class.

Recordings include: Don’t Monkey with Broadway; Far Away Places; Patti LuPone at Les Mouches; The Lady with the Torch; and many original cast recordings including, most recently: the London production of Company; War Paint; Women on the Verge of a Nervous Breakdown; Gypsy;  and Sweeney Todd (both the 2006 Broadway revival cast recording and 2000 live performance recording on NY Philharmonic’s Special Editions Label).

She is the author of The New York Times bestseller Patti LuPone: A Memoir. 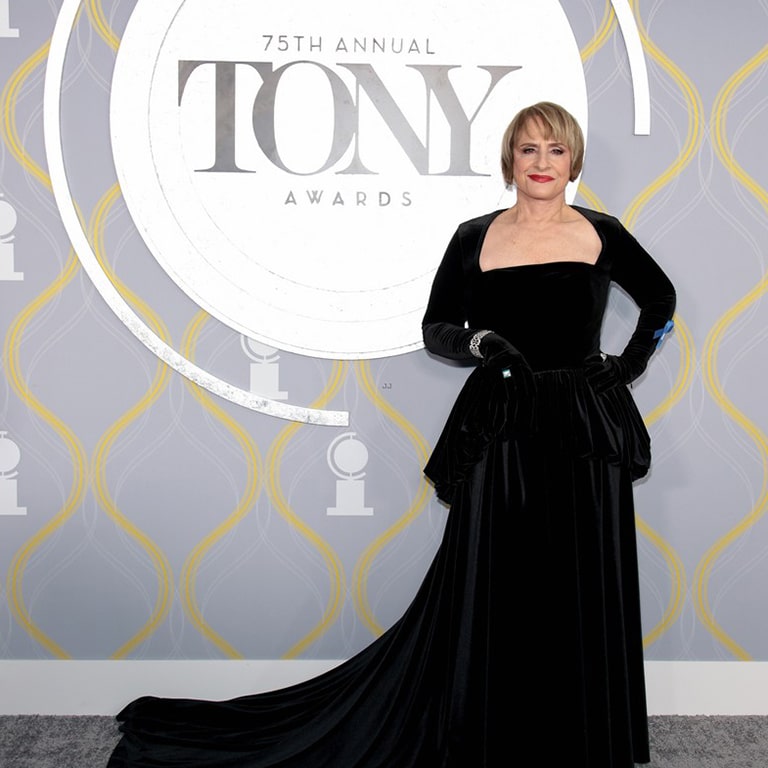