“Pouliot’s virtuosity went from moments of great power and brawn to stratospheric notes so delicate they sounded like they could fall from the high-wire at any moment.”

“One of those special talents that comes along once in a lifetime.”

“Pouliot cuts a striking figure, and, with his light purple jacket and bad boy haircut, he ­reminded this listener of the British superstar violinist Nigel Kennedy in his younger days. Nor was the comparison too far-fetched musically, for here is clearly a young ­violinist of great promise, producing not only a lovely, mellow violin tone in the more contemplative first two movements, but also an exemplary sense of pacing and colour in, for example, the end of the second movement. Here was sentiment, not ­sentimentality, just what the concerto needs to avoid sounding too mawkish.”

“Pouliot joined the orchestra for a consuming rendition of Bruch’s “Scottish Fantasy” for violin and orchestra. He played with a completely captivating mix of musical fervor, some blindingly fast technical passages, simply stated traditional folk tunes, and a completely disarming grin that popped up in the middle of musical pyrotechnics.”

“Pouliot puts the listener at ease and makes them receptive to what he has to say, ­executing the concerto with a superb sound and well-placed sweetness. Passing from admirable to overwhelming, there is even a little something in my ears that I can hardly define, a kind of brilliance, with sharp harmonics, and a singing strength in the upper register to equal that of the lower. ”

“The disconcerting ease he has in articulating sentences, the richness of his sonority, the voluptuousness of his playing in all tempos and the coefficients of difficulty, these are all qualities that place him ahead in the world, elite among performers of all ages.”

“His playing throughout was immaculate, at once refined and impassioned and characterized by the full use of his bow. Unreserved, he played the violin lovingly and with technical precision. Pouliot is also visually expressive in a distinctive way. When not playing it’s apparent that he’s listening, looking at the orchestra and responding almost as if he’s hearing their part for the first time. The audience, though well-versed in concert etiquette, still couldn’t help but to applaud between movements.”

“He also displayed a gorgeous high register, ringing notes that resonated beautifully in Overture Hall…The highlight of the evening may have been the second movement of the concerto. Stylistically, this movement resembles Mendelssohn’s well-known “Songs Without Words.” Pouliot tastefully rendered the songful tune and kept the audience hanging on every last note — pure gorgeousness.”

“Max Bruch’s Scottish Fantasy uses melodies from Scotland as its basis in four movements. Essentially a violin concerto, it featured guest soloist Blake Pouliot, a young Canadian. Pouliot’s violin cast a sweet, lean, silky sound. He seemed effortless in his graceful playing, even in the virtuoso sections of the jolly final movement. Pouliot’s extroverted personality came forth in that movement, showing the pure joy of music making. I couldn’t help but smile in pleasure listening to him.”

Described as “immaculate, at once refined and impassioned,” (ArtsAtlanta) violinist Blake Pouliot (pool-YACHT) has anchored himself among the ranks of classical phenoms. A tenacious young artist with a passion that enraptures his audience in every performance, Pouliot has established himself as “one of those special talents that comes along once in a lifetime” (Toronto Star).

Pouliot ventures into a spectacular 2022/23 season highlighted with debuts at the symphonies of Arkansas, Bangor, Elgin, North Carolina, Oregon, Tacoma, and Westmoreland. He returns to the stages of the Madison and Milwaukee symphonies as well as the Orchestre Symphonique de Montréal performing the works of Beethoven, Saint-Saens, and Paganini. Pouliot also brings his recital programming to Temecula, Paris and to his debuts in Boston and at Toronto’s Koerner Hall; He widens his artistic lens in the Boston performance by commissioning the world premiere of Derrick Skye’s solo for violin and electronics, entitled “God of the Gaps”. A prolific collaborator, Pouliot rounds out this season with his debut at the Seattle Chamber Music Society and a return to La Jolla Summerfest. He also returns to the National Youth Orchestra of Canada to embark on his second year as Artist-in Residence, following last season’s inaugural residency in which the organization welcomed him to cultivate a curated program for students and faculty.

Recent highlights include debuts with the Boise Philharmonic, Omaha Symphony, Philadelphia Orchestra, Plano Symphony, Sarasota Orchestra and Winnipeg Symphony; and being named Artist-in-Residence at Orchestre Métropolitain where he deepened his relationship with the orchestra’s music director, Yannick Nézet-Séguin.

Pouliot released his debut album on Analekta Records in 2019 to critical acclaim including a five-star rating from BBC Music Magazine as well as a 2019 Juno Award nomination for Best Classical Album. Adding to his accolades that year, Pouliot won both the Career Development Award from the Women’s Club of Toronto and the Virginia Parker Prize Career Grant from the Canada Arts Council. He has been featured twice on Rob Kapilow’s What Makes it Great? series and was NPR’s Performance Today Artist-in-Residence for the 2017-18 season in Minnesota the 2018-19 season in Hawaii, and the 2021-22 season across Europe. In 2016, he was awarded the Grand Prize at the Orchestre symphonique de Montréal Manulife Competition and was named First Laureate of both the 2018 and 2015 Canada Council for the Arts Musical Instrument Bank.

Since his orchestral debut at age 11, Pouliot has performed with the orchestras of Aspen, Atlanta, Detroit, Dallas, Madison, Montreal, Toronto, San Francisco, and Seattle, among many. Internationally, he has performed as soloist with the Sofia Philharmonic in Bulgaria, Orchestras of the Americas on its South American tour, and was the featured soloist for the first ever joint tour of the European Union Youth Orchestra and National Youth Orchestra of Canada. He has collaborated with many musical luminaries including conductors Sir Neville Marriner, David Afkham, Pablo Heras-Casado, David Danzmayr, JoAnn Falletta, Marcelo Lehninger, Nicholas McGegan, Alexander Prior, Vasily Petrenko and Thomas Søndergård.

Pouliot studied violin in Canada with Marie Bérard and Erika Raum, and he completed his training as an associate of The Royal Conservatory of Music in Toronto. He graduated from the Colburn School Conservatory of Music, where he studied with Robert Lipsett, the Jascha Heifetz Distinguished Violin Chair.

Pouliot performs on the 1729 Guarneri del Gesù on generous loan from an anonymous donor. 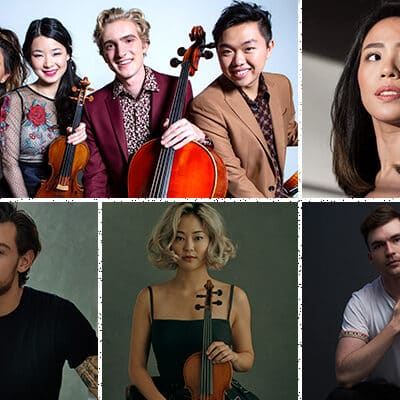