“The influence and importance of the company, to both the dance world and the culture at large, are wide and multifaceted.”

“Alvin Ailey Dancers Return Like Conquering Heroes…It’s splendid to see the performers of the Alvin Ailey American Dance Theater again. They burst onto the City Center Theater stage with heroic vitality: The texture of their dancing is powerful…”

“More so than any other major dance company, the Alvin Ailey American Dance Theater carries an aura of social, moral and even spiritual righteousness. It’s not just the dancers’ exquisite athleticism and peerless commitment that convey this and transfer such a rush to the audience. It’s also the artistic content, especially when it directly engages with human virtues.”

“…nearly six decades as a cultural phenomenon, the Alvin Ailey American Dance Theater has created a unique and enduring bond with its audiences. And when the company arrives for its annual Chicago engagement something else pops into place: The Auditorium Theatre instantly becomes the most racially mixed hub in a city that can still be divided.”

“The Alvin Ailey American Dance Theater, about to celebrate its sixtieth birthday, is the repository of some of the best dancers in the country, and is accumulating a repertory worthy of their skill.”

Alvin Ailey American Dance Theater grew from a now-fabled performance in March 1958 at the 92nd Street Y in New York City. Led by Alvin Ailey and a group of young African-American modern dancers, that performance changed forever the perception of American dance. The Ailey company has gone on to perform for an estimated 25 million people at theaters in 48 states and 71 countries on six continents – and has reached millions more online and through television broadcasts.

In 2008, a U.S. Congressional resolution designated the Company as “a vital American cultural ambassador to the world” that celebrates the uniqueness of the African-American cultural experience and the preservation and enrichment of the American modern dance heritage.

When Mr. Ailey began creating dances, he drew upon his “blood memories” of Texas, the blues, spirituals, and gospel as inspiration, which resulted in the creation of his most popular and critically acclaimed work, Revelations.

Although he created 79 ballets over his lifetime, Mr. Ailey maintained that his company was not exclusively a repository for his own work. Today, the Company continues Mr. Ailey’s mission by presenting important works of the past and commissioning new ones. In all, morethan 200 works by over 80 choreographers have been part of the Ailey company’s repertory.

Before his untimely death in 1989, Alvin Ailey named Judith Jamison as his successor, and over the next 21 years, she brought the Company to unprecedented success. Ms. Jamison, in turn, personally selected Robert Battle to succeed her in 2011. In announcing his appointment as Artistic Director, she stated, “Combining an intimate knowledge of the Ailey company with an independent perspective, Robert Battle is without question the creative force of the future.” 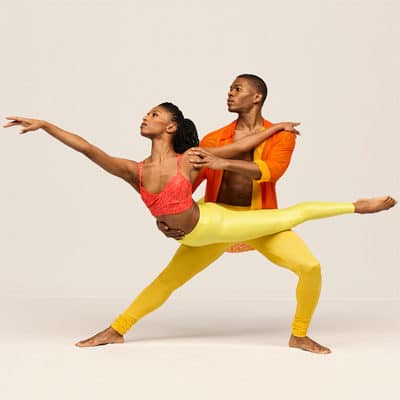