The Concert Truck is a mobile music venue that strengthens communities by redefining the concert experience and making live music accessible to all. It engages diverse communities and audiences nationwide with thoughtful, timely programming, and works with arts organizations of all sizes to build a critical presence in their communities.

Impassioned by their love for music and belief in its emotional power, pianists Nick Luby and Susan Zhang converted a 16-foot box truck into a fully functioning mobile concert hall, complete with lights, sound system, and piano. Since then, The Concert Truck has toured across the country, presenting concerts in city streets, music and arts festivals, schools, neighborhoods, parks… anywhere you can think to park a truck. Nick, Susan, and the Truck have been featured by Voice of America – VOA, Minnesota Public Radio, the Washington Post, the Baltimore Sun, WYPR Maryland, and many local TV news stations and online publications and syndicates. Upcoming performances this summer include Aspen Music Festival and the Virginia Arts Festival.

In addition to sharing original programming with local communities, The Concert Truck strengthens relationships between arts organizations and the communities they serve. In the Fall 2020 season, The Concert Truck partnered with The Kennedy Center’s Washington National Opera, University of South Carolina, Southeastern Piano Festival, and Dallas Symphony Orchestra to deliver great music to their local communities. Additionally, The Concert Truck created an online children’s show in partnership with the Four Seasons Chamber Music Festival that has been presented to over 40,000 students in North Carolina schools. Other past presenters include Minnesota Public Radio and the Smithsonian.

The Concert Truck launched in April 2016, giving eight performances in five days throughout the city of Columbia, SC. It has received awards, fellowships, and grants for social innovation and creativity in music.

NICK LUBY
Nick Luby is an artist who breaks boundaries and challenges the status quo. He has won prizes in numerous competitions, most recently the 2019 Prix Ravel, and has performed throughout the U.S. and Europe. A Chapel Hill native, Nick holds the Graduate Certificate in Performance from the University of South Carolina, an MM in Piano Performance from the University of Michigan, and a BA with honors in Music and Philosophy from Wesleyan University. Nick also maintains a successful teaching studio in Baltimore. His students have won international competitions, and he has been a featured guest artist at the Southeastern Piano Festival and University of Northern Iowa’s Exploring Chamber Music Festival.

SUSAN ZHANG
Acclaimed as a pianist with “astounding musical authority” (Columbia Free Times), Susan Zhang made her orchestral debut at the age of twelve with the Augusta Symphony. She has performed in Kodak Hall at Eastman Theatre, the Woodruff Arts Center, Pianofest in the Hamptons, Burgos International Music Festival, the Southeastern Piano Festival, and Brevard Music Center, among other venues and festivals worldwide. Susan has won prizes in competitions including the Thousand Islands Chopin Competition, the Burgos International Music Festival Competition, and the Arthur Fraser International Piano Competition. Passionate about sharing music with the next generation, Susan has written, directed, and performed in live and pre-recorded musical productions for children that have been presented across the Southeast. She is a graduate of the Eastman School of Music, Peabody Conservatory, and the University of South Carolina. Susan currently serves on faculty at the Peabody Conservatory. 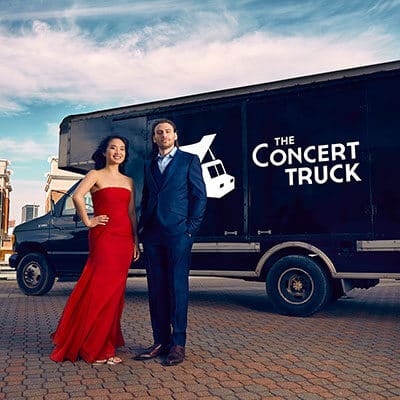 The Concert Truck Joins the Roster