“There are almost no words to describe the orchestra’s exquisite performance of Gustav Mahler’s work…Throughout these movements, Pintscher was a superb partner. His view was deeply musical. Every detail finely etched as he propelled the orchestra, whipped up atmospheres, and allowed orchestral soloists plenty of time to shape a phrase. But it was the final and longest movement, “The Farewell,” that was the most spellbinding. The conductor paused at length, as if to allow the previous dream worlds to evaporate, before plunging into the ominous notes that open this movement. He led with spontaneity, conjuring orchestral colors that depicted meandering brooks, birdcalls, and cool winds. There was no foot-dragging in the funeral march at its center. Every moment was gripping.”

Matthias Pintscher is the Music Director of the Ensemble Intercontemporain, the world’s leading contemporary music ensemble founded by Pierre Boulez. In addition to a robust concert season in Paris, he tours extensively with the orchestra throughout Europe, Asia, and the United States. In 2020/21, Pintscher also began a three-season appointment as the Cincinnati Symphony Orchestra’s new Creative Partner. Known equally as one of today’s foremost composers, Pintscher’s works are frequently commissioned and performed by major international orchestras.

Matthias Pintscher opens his 21/22 season as the “Theme Composer” of Suntory Hall’s 2021 festival, including the world premiere of his work neharot which he will conduct with the Tokyo Symphony Orchestra (co-commissioned with the Los Angeles Philharmonic, Staatskapelle Dresden, Orchestre Philharmonique de Radio France, and the Orchestre de la Suisse Romande), an intensive week of performances with the Ensemble Intercontemporain, as well as chamber concerts. In addition, he and Ensemble Intercontemporain will give concerts in Yokohama and Moscow. In January 2022, his violin concerto written for Leila Josefowicz, Assonanza II, will be premiered by the Cincinnati Symphony under Pintscher’s baton. Pintscher will make debuts in 21/22 with the Pittsburgh Symphony, Staatskapelle Dresden, Lahti Symphony, and Musikkollegium Winterthur. He returns to the Houston Symphony, Indianapolis Symphony, Orchestre de la Suisse Romance, Barcelona Symphony, Orchestre Philharmonique de Radio France, Netherlands Radio Philharmonic Orchestra at the Holland Festival, Academy of the Berlin Philharmonic, and the Boulez Ensemble. In recent seasons, Pintscher has begun to conduct staged operas, and in 21/22 will return to the Staatsoper Unter den Linden in Berlin to lead Lohengrin, for which he gave the production’s premiere the prior season.

Recent highlights include his debut at the Vienna State Opera conducting the world premiere of Olga Neuwirth’s opera Orlando, debuts with the Montreal and Baltimore symphony orchestras, and conducting the premiere of his new work for baritone, chorus, and orchestra, performed by Georg Nigl and the Symphonieorchester des Bayerischen Rundfunks at the Musica Viva festival in February 2020.

Pintscher has held many titled positions, most recently as the BBC Scottish Symphony Orchestra’s Artist-in-Association for nine seasons. In 2018/19, he served as the Season Creative Chair for the Tonhalle-Orchester Zürich, as well as Artist-in-Residence at the Los Angeles Chamber Orchestra. An enthusiastic supporter of and mentor to students and young musicians, Pintscher was Principal Conductor of the Lucerne Festival Academy Orchestra from 2016-2018 and has worked with the Karajan Academy of the Berlin Philharmonic.

Matthias Pintscher began his musical training in conducting, studying with Pierre Boulez and Peter Eötvös in his early twenties, during which time composing soon took a more prominent role in his life. He rapidly gained critical acclaim in both areas of activity, and continues to compose in addition to his conducting career. A prolific composer, Pintscher’s music is championed by some of today’s finest performing artists, orchestras, and conductors. His works have been performed by such orchestras as the Boston Symphony, Chicago Symphony, Cleveland Orchestra, New York Philharmonic, Philadelphia Orchestra, Berlin Philharmonic, London Symphony Orchestra, Royal Concertgebouw Orchestra, and the Orchestre de Paris, among many others. He is published exclusively by Bärenreiter, and recordings of his works can be found on Kairos, EMI, Teldec, Wergo, and Winter & Winter. Matthias Pintscher has been on the composition faculty of the Juilliard School since 2014. 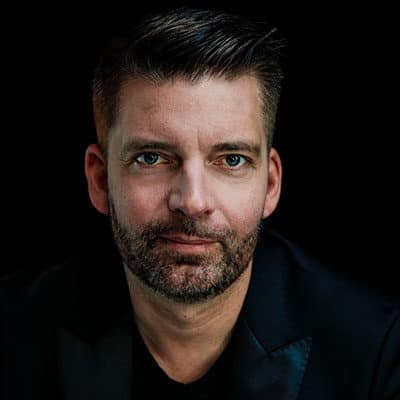