“Simply put, they’re a knockout! Three benevolent monsters, monsters of ability and technique surely. But also conveyors of an infectious joy that I find both touching and moving. I would recommend them not only for entertainment value, but also for anyone looking to see how all types of American Music can develop, when life and passion such as this are breathed into it.”

“When the three musicians get together, the resulting mash-up is often equal parts spontaneity and virtuosic precision.”

“In person, the members of Time for Three come off as just three dudes in a band. But with their staggering technique and freewheeling genre-crossing, it’s hard not to be swept up in the force of their contagious energy.”

“The group’s two violinists and double bassist look and act more like an indie-rock band.”

“Is it bluegrass or country, jazz improvisation or some new kind of classical? One thing’s for certain.
It’s fabulous.”

“Time for Three embodies a new breed of chamber musicians who turn a concert into a show.”

Defying convention and boundaries, Time For Three stands at the busy intersection of classical music, Americana, and singer-songwriter. To experience Time For Three (TF3) live is to hear the various eras, styles, and traditions of Western music fold in on themselves and emerge anew. Bonded by an uncommon blend of their instruments fused together with their voices, Charles Yang (violin, vocals), Nicolas “Nick” Kendall (violin, vocals), and Ranaan Meyer (double bass, vocals), have found a unique voice of expression to share with the world.

Earning praise from NPR, NBC, The Wall Street Journal, and the Chicago Sun-Times to name a few, the band has become renowned for their charismatic and energetic performances. Having graced the stages of Carnegie Hall, The Kennedy Center, The Royal Albert Hall and Wiener Musikverein their inimitable and mutable style fits equally well in an intimate club setting including Joe’s Pub (New York City) and Hotel Cafe (Los Angeles). Time for Three has performed with numerous symphony orchestras including the San Francisco Symphony, Philadelphia Orchestra, BBC Concert Orchestra, Czech Philharmonic, and the Baltimore Symphony. Residencies include a twelve-year residency with the Indianapolis Symphony and the Sun Valley Music Festival Orchestra.

Time For Three was featured on the “Night of the Proms” European arena tour sharing the stage with artists including Chaka Khan and Ronan Keating. The trio has collaborated with a diverse group of artists across many genres including Ben Folds, Branford Marsalis, Joshua Bell, Aoife O’Donovan, Natasha Bedingfield, and Arlo Guthrie.

They’ve appeared on ABC’s Dancing With The Stars, and won an Emmy for their PBS special, “Time For Three In Concert.” Yet for all their accolades and diverse experiences, the irrepressible band constantly hungers for new ones. In 2020, the band partnered with cellist and composer Ben Sollee to put together the soundtrack to the new Focus Features’ film Land, starring and directed by Robin Wright. The film first premiered at the Sundance Film Festival on January 31, 2021. With a collection of new songs, the band teamed up with GRAMMY-winning songwriter Liz Rose and GRAMMY-winning producer Femke Weidema for new recordings released through Warner Music.

Time for Three’s latest project is an album released June 10, 2022 on Deutsche Grammophon. The album, entitled Letters for the Future, was recorded with The Philadelphia Orchestra at Verizon Hall, conducted by Xian Zhang. 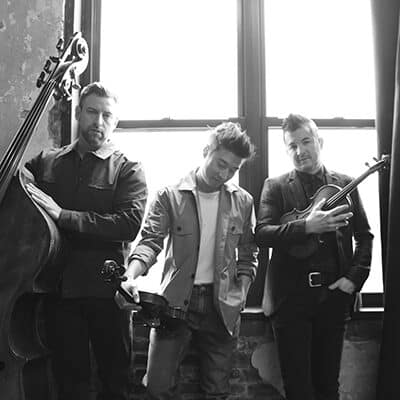 Time For Three joins the roster