“… Mr. Jacobsen was an interpretive dynamo.”

“In the first movement, the contrast… between the breadth and the power of the orchestral exposition and the incredible lightness in the development is negotiated with mastery.”

“The orchestral playing is particularly impressive: The Knights, under the baton of Eric Jacobsen, provide both a strong force and subtle sensitive moments… The orchestra gives strength in characters, glowing and shimmering… full of ever-changing virtuosic prowess.”

“The Knights, an ensemble that loves to share and open doors of musical exploration for audiences, has reached, with its director Eric Jacobsen, a level of ambition and sound perfection that is, again, unparalleled. Unforgettable, was the comment one could overhear everywhere when leaving the concert hall. We agree and confirm!”

“…As a conductor, Jacobsen never upstaged the music. He used graceful, sweeping motions or small, precise strokes for trickier passages. But there was nothing flashy about his direction; he appeared perfectly content to let featured musicians keep the momentum going when appropriate.”

“In the second movement [of Beethoven’s symphony no. 7] Jacobsen knows how to effectively approach the Funeral March and then give a sample of the ensemble’s potential in the following Presto…Jan Vogler and the Knights were in their quintessential element and caused thundering applause.”

Hailed by the New York Times as “an interpretive dynamo,” conductor and cellist Eric Jacobsen has built a reputation for engaging audiences with innovative and collaborative programming. He is the newly-named Music Director of the Virginia Symphony, becoming the 12th music director in the orchestra’s 100-year history, and assumed that post on July 1, 2021.

Jacobsen is Artistic Director and conductor of The Knights, and serves as the Music Director for the Orlando Philharmonic Orchestra. Jacobsen founded the adventurous orchestra The Knights with his brother, violinist Colin Jacobsen, to foster the intimacy and camaraderie of chamber music on the orchestral stage. As conductor, Jacobsen has led the “consistently inventive, infectiously engaged indie ensemble” (New York Times) at Central Park’s Naumburg Orchestral Concerts, Celebrate Brooklyn! Festival, (Le) Poisson Rouge, the 92nd Street Y, Carnegie Hall, and Lincoln Center; at major summer festivals such as Tanglewood, Ravinia, and Ojai; and on tour nationally and internationally, including at the Cologne Philharmonie, Düsseldorf Tonhalle, Hamburg Elbphilharmonie, Salzburg Großes Festspielhaus, Vienna Musikverein, National Gallery of Dublin, and the Dresden Musikfestspiele. Recent collaborators include violinists Itzhak Perlman and Gil Shaham, singers Dawn Upshaw, Susan Graham, and Nicholas Phan, and pianists Emanuel Ax and Jean-Yves Thibaudet. Also in demand as a guest conductor, Jacobsen has led the symphony orchestras of Baltimore, Detroit, the New World, St. Paul Chamber Orchestra, the Deutsche Philharmonie Merck and the Tonkunstler Orchestra, with whom Jacobsen appeared at Vienna’s legendary Musikverein.

In the coming season, Eric Jacobsen returns to the Detroit Symphony for the world premiere of James Lee III’s “Amer’ican,” a contemporary response to Dvorak’s “New World” Symphony which also features on the program.  He has also made his La Jolla Summerfest debut, conducting three concerts featuring Summerfest Artistic Director Inon Barnaton and other artists.  He appears twice with the Virginia Symphony, with guest artist Branford Marsalis and also performing Beethoven’s Ninth Symphony, and travels to Bilkent, Turkey, to appear with the orchestra there. With The Knights, he returns to the Tanglewood and Caramoor Festivals and to Central Park’s Naumburg Bandshell, and appears at Wolf Trap in a new piece by Grammy-winning singer/songwriter Aoife O’Donovan. In the spring, Jacobsen and The Knights close their season with a multi-city US tour featuring pianist Aaron Diehl.

The 21-22 Orlando Philharmonic season sees the return of the “Resonate” festival, a unique blend of old and new orchestral and chamber works, performed in standard and more intimate concert formats. This season’s edition features Artist-in-Residence Stewart Goodyear performing the complete piano sonatas of Beethoven as well as orchestral repertoire. The Orlando season will close with a semi-staged production of Orff’s “Carmina burana,” with staging by Alison Moritz and choreography by John Heginbotham.

In recent seasons, Eric Jacobsen and The Knights performed a fully-staged centennial production of Bernstein’s Candide directed by Alison Moritz at the Ravinia Festival, and toured Florida with Gil Shaham. With mandolin virtuoso Avi Avital, Jacobsen and The Knights undertook a 15-concert European tour, including performances at Hamburg’s Elbphilharmonie and Vienna’s Musikverein. In New York, Jacobsen and The Knights performed at Carnegie Hall’s Zankel Hall; with groundbreaking countertenor Anthony Roth Costanzo at National Sawdust in music of Handel and Philip Glass; and at the Park Avenue Armory, where they helped create the music for William Kentridge’s The Head and the Load.

At the close of a successful sixth season with the Orlando Philharmonic Orchestra, Jacobsen has continued to pioneer the orchestra’s programming and community engagement in new and exciting directions. During the 20-21 season, the Orlando Philharmonic was one of the few orchestras internationally that was able to perform live concerts, including with renowned pianist Yuja Wang, and they closed their season with “America, Come,” an Orlando Philharmonic commission from Aoife O’Donovan honoring the centennial of the 19th Amendment. Previous seasons included Inside the Score, in which Jacobsen led the audience on a guided exploration of Hector Berlioz’s Symphonie fantastique; appearances by multi-instrumentalist Angélica Negrón as composer-in-residence; and guest appearances by Grammy-winning singer-songwriter Rhiannon Giddens and internationally acclaimed cello virtuoso Jan Vogler.

Under Jacobsen’s baton, The Knights have developed an extensive recording collection, which includes the critically acclaimed albums Azul, with longtime collaborator Yo-Yo Ma, as well as the Prokofiev Concerto in the Grammy-nominated Gil Shaham album 1930s Violin Concertos. Their most recent release, featuring Gil Shaham in performances of the Beethoven and Brahms Violin Concertos, was met with critical acclaim upon its release in Spring 2020. The Knights issued three albums for Sony Classical including Jan Vogler and The Knights Experience: Live from New York; New Worlds, and an all-Beethoven album, as well as the “smartly programmed” (National Public Radio) A Second in Silence on the Ancalagon label. Jacobsen’s first release on Warner Classics was the ground beneath our feet. We Are The Knights, a documentary film produced by Thirteen/WNET, premiered in September 2011.

In December 2012, Jacobsen and his brother Colin were selected from among the nation’s top visual, performing, media, and literary artists to receive a prestigious United States Artists Fellowship. Eric splits his time between New York and Orlando with his wife, singer-songwriter Aoife O’Donovan, and their daughter. 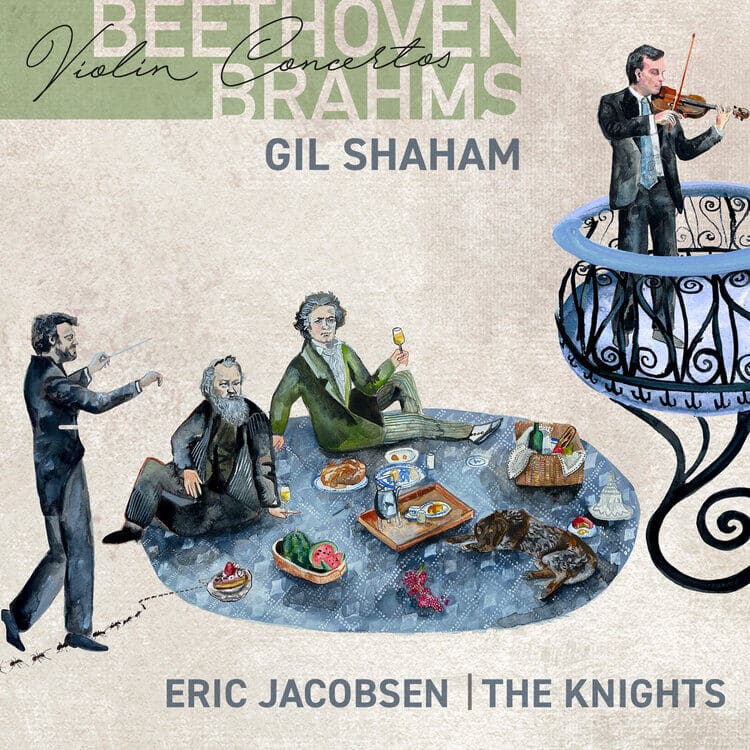 Gil Shaham and The Knights Release “Beethoven and…