“One of the new generation’s most promising and gifted young concert soloists.”

“Diana Adamyan is a name you will hear again….following her career promises to be a joy.”

Diana Adamyan is quickly gaining an international reputation as one of her generation’s most outstanding violinists. After winning the First Prize at the 2018 Yehudi Menuhin International Competition, the world’s most prestigious prize for young violinists, she went on to be awarded First Prize in the 2020 Khachaturian Violin Competition which was held online due the COVID-19 pandemic.

Born in 2000 in Yerevan, Armenia, into a family of musicians, Ms. Adamyan currently studies at the Munich University of Performing Arts with world-renowned teacher, Professor Ana Chumachenco, whose distinguished students have included Lisa Batiashvili, Julia Fischer, and Veronika Eberle. Previously, she studied at the Tchaikovsky School of Music (Yerevan) with Prof. Petros Haykazyan and at Yerevan Komitas State Conservatory with Professor Eduard Tadevosyan.

Since winning First Prize at the Menuhin Competition, Ms. Adamyan has received numerous proposals to participate in the concerts around the world, from the Royal Philharmonic Orchestra in London, to the Seiji Ozawa Academy in Switzerland, and the Matsumoto International Music Festival in Japan. Upcoming engagements include recitals in Tokyo and France, and her debut with the Deutsche Symphonie Orchester.

Following, an invitation from Maestro Pinchas Zukerman to participate under his guidance in summer masterclasses of the Ottawa National Arts Center, Ms. Adamyan was invited to appear as a soloist in Gala Concert of NAC, alongside Pinchas Zukerman, Itzhak Perlman, Jessica Linnebach and other renowned musicians. Later, she also appeared alongside Pinchas Zukerman playing the Bach Double Concerto with the Royal Philharmonic at Cadogan Hall in commemoration of the 100th year of the Armenian Genocide.

Diana Adamyan performed on a violin crafted by Urs Mächler for the Menuhin Competition, and now performs on an instrument made by Nicolò Gagliano in 1760, generously on loan from the Henri Moerel Foundation. 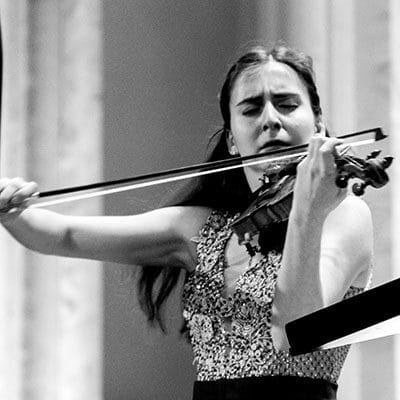