Pianist Joseph Kalichstein had an impressive range of colour, which allowed him to be assertive without being heavy (though when Beethoven’s gruff humour needed a deliberately over-heavy tone he could do that, too).”

“…supremely musical and alive to fleeting shadows of melancholy-especially in the remarkable development of the opening movement, where Mozart’s sudden shift to a remote minor key can break your heart.”

“He is a total musician and masterful pianist, meaning that he has it all. Yet so pure is the musical essence he distills in recital that the instrument becomes almost irrelevant. I suspect he could make profound music with a kazoo. And make no mistake, much of the music on this program was profound and came across with an emotional power that was unforgettable. ”

“From the first solemn chords, Kalichstein exuded pianistic authority. He brought torrents of virtuosity to the keyboard- spanning paragraphs of the Scherzo and sensitivity to the more pointed lyricism of the Intermezzo. Kalichstein was fleet and assertive in the bold Russian motif of the concluding Allegretto. He blended seamlessly with the quartet, the piano line part of the instrumental fabric rather than constantly dominant.”

Acclaimed for the heartfelt intensity and technical mastery of his playing, pianist Joseph Kalichstein enthralls audiences all over the globe, winning equal praise as orchestral soloist, recitalist and chamber musician.

As an Australian critic exclaimed: “To hear Kalichstein play is to fall in love with music all over again!”

With his diverse repertoire of works ranging from Bach, Mozart, Beethoven and Brahms to works by Bartok, Prokofiev and others, Mr. Kalichstein has collaborated with such celebrated conductors as Daniel Barenboim, Pierre Boulez, James Conlon, Christoph von Dohnányi, Charles Dutoit, Lawrence Foster, Zubin Mehta, Andre Previn, Leonard Slatkin, Edo de Waart, David Zinman and the late George Szell and Erich Leinsdorf. He has performed with the world’s greatest orchestras, from the Boston and Chicago Symphony Orchestras to the Berlin Philharmonic and the London Symphony, from the NHK and New York Philharmonic to the Cleveland Orchestra. Mr. Kalichstein has also been a frequent guest pianist with the world’s most beloved string quartets, including the Guarneri and Emerson Quartets, with whom he played the Shostakovich Piano Quintet in their Shostakovich Cycles in London and Washington.

A favorite of New York concertgoers, Mr. Kalichstein has appeared in several recitals on Carnegie Hall’s “Keyboard Virtuosi” series. His latest CD releases include music of Schumann and Brahms (on Koch International) and of Brahms, Mendelssohn and Schubert (“The Romantic Piano”, on Audiofon). He serves as the Chamber Music Advisor to the Kennedy Center and is the Artistic Director of the Center’s Fortas Chamber Music Concerts. He continues to hold the inaugural Chamber Music Chair at the Juilliard School, where he also teaches a limited number of advanced piano students.

Born in Tel Aviv, he came to the United States in 1962. His principal teachers included Joshua Shor in Israel and Edward Steuermann and Ilona Kabos at The Juilliard School. Prior to winning the 1969 Leventritt Award, he had won the Young Concert Artists Auditions, and as a result he gave a heralded New York recital debut, followed by an invitation from Leonard Bernstein to perform Beethoven’s Piano Concerto No. 4 with the New York Philharmonic in a nationally televised concert on CBS.

Joseph Kalichstein is a founding member of the famed Kalichstein-Laredo-Robinson Trio, now in their 42nd touring season. The Trio continues to play in major music capitals as well as on all the great university concert series. Its most recent recording project is a CD devoted to works that the eminent American composer Ellen Zwilich had written for the Trio, just released on the Azica label. Bridge records has recently released their critically acclaimed 2-CD Schubert Cycle. 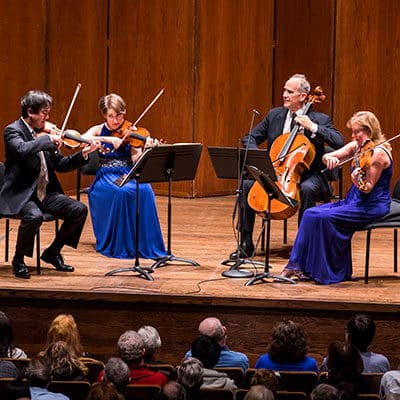