yMusic’s “Ecstatic Science” is Out Now

Now in their second decade, yMusic, “one of the groups that has really helped to shape the future of classical music,” (Performance Today) has certainly made an impact on the music world, recently bringing their unorthodox instrumentation (trumpet, flute, clarinet and string trio) to projects ranging from a world tour with Paul Simon to sold-out programs of commissioned music at Carnegie Hall, and collaborating with iconic artists such as choreographer/dancer Bill T. Jones and singer/songwriter Anohni.

If there is a common thread that runs through yMusic’s many projects, it’s the ensemble’s exquisite taste in collaborators, and this 4th album is no exception. The five pieces on Ecstatic Science retain the ensemble’s signature sound while pushing the group to new artistic heights.

Some of the names on the record will be familiar to many fans of contemporary music — Pulitzer Prize-winner and Kanye West collaborator Caroline Shaw, and first-ever female Metropolitan Opera commissionee Missy Mazzoli. Paul Wiancko provides a wonderful set piece, Thous&ths, which shows the true symphonic potential of yMusic’s mixed instrumentation.

Notably, the ensemble performs two tracks by Gabriella Smith, whose propulsive, unusual textures and tight structures are surprise standouts on the album. “We are all massive Gabriella Smith fans,” says yMusic violist Nadia Sirota. “We are so excited to see where her career takes her over the next few years.”

yMusic’s work with artists across many genres has influenced them in countless ways, but perhaps most surprisingly, “these artists are drawn to the thornier stuff we do,” explains violinist Rob Moose. “Their admiration for our own work renews our interest in commissioning music and this album is a reflection of all of our experiences together in our first decade as a group.”

Critical Acclaim
“Subsequent, soaring lines for flutist and occasional singer Alex Sopp provide a feeling of liftoff. At other points, the trumpet and clarinet collaborate on nimble staccato patterns, creating a regal quality that also seems casually assured…On this album, her title track suits the group’s expressive range of performance styles. After initially toggling between blitzing melody and languid droning, Mazzoli’s composition bridges these divergent states without any hint of rough edges…This gift for melody is rarely the only winning element of her [Caroline Shaw’s] music; surprising pivots of harmony and new rhythmic patterns keep coming with a steadiness that might throw unseasoned interpreters. Thankfully, yMusic know this terrain so well that their performances have an untroubled gait—one that reflects their commitment to making new-classical music accessible to varied audiences. Programs of music that are this fluidly engaging aren’t in much need of pop-world assistance.”
Pitchfork

“yMusic’s commissions (and Alejandro Venguer’s production) give a vehicle for their dazzling ability to experiment with—and even warp—perspective…Ecstatic Science shows yMusic entering the new decade with eyes open to its new directions, though firmly grounded in an ensemble identity. Listening to the album in sequence can even suggest a narrative: a big, banging, and delightfully clamorous yMusic contracts to an intrepid and malleable yMusic. How will that group identity shift into their future? Does their sensitive performance of Smith’s Maré foreshadow a broadening of the ensemble’s standard fare? This balanced album seems to reach beyond what Nadia Sirota has identified as their niche: “groove-typed, hockety pieces.” With their veteran status and pieces like Wiancko’s and Smith’s to guide future commissioned composers, yMusic promises to grow into 2020 and beyond in unexpected and surprising ways.”
I Care If You Listen

“yMusic, a six-member ensemble of extraordinarily talented musicians founded in New York City in 2008, can help. On their new fourth album, Ecstatic Science, yMusic have created a focused opportunity to experience current classical music through the works of four young composers…This is not classical music meant to soothe your jangled nerves. This is music meant to fire up the neurons in your brain and keep those neurons on alert for the album’s duration…While Ecstatic Science features the work of four composers, yMusic ties it all together nicely, creating a cohesive album that provides one glimpse (of many possible glimpses) of the state of modern classical music.”
Pop Matters

“Ecstatic Science (New Amsterdam Records) sees them commissioning new work from some of America’s top contemporary composers. It’s bookended with two pieces by Gabriella Smith (the pulsating Tessellations and the microtonal minimalism of Maré), and features a lengthy, episodic suite from Caroline Shaw that’s rich in architectural detail. Best of all is Missy Mazzoli’s title track, where Morse code woodwind splutters over keening string glissandos, like a balletic figure skater skidding around the rink but just about managing to stay on her feet.”
The Guardian

“There’s no way to listen to this piece without feeling a tingle of delight, and perhaps it’s just as hard not to feel sad when the piece comes to a close after just 4½ minutes. But consolation is at hand, because “Tesselations” is only the opening salvo of “Ecstatic Silence,” the terrific recording by the new music sextet yMusic…But nothing has caught my attention with quite the insinuating glee that’s on display in this short but potent release…There’s a prevailing aesthetic at work here, a spirit of cool sleekness that runs through all the music without making any of it conform to an overarching pattern…All of this music is delivered in a series of sharp-edged, vivid performances that are at once precision-tooled and full of autonomous life. It’s an exhilarating affair.”
San Francisco Chronicle 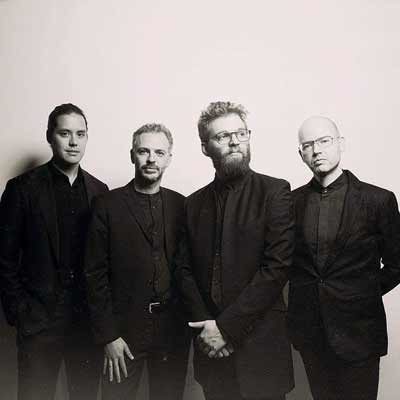