Let me just get this out right off the bat: Jessica Vosk’s solo cabaret debut at Segerstrom Center for the Arts—which opened Thursday, November 17, 2022 and continues for two additional shows through Saturday, November 19—is, quite possibly, the most enjoyable cabaret concert I have experienced at the Center’s lovely and intimate Samueli Theatre.

From the moment she surprised the audience by entering from the back of the room, right up until her final, gorgeous encore finalé, the former Wall Street financier turned Broadway star had the entire place giddy with excitement, laughing up a storm, and utterly floored by her spectacular vocal range.

A wow-inducing show filled with whip smart, laugh-out-loud humor, fun personal stories, and some of the most stunning vocal riffs I’ve heard sung live, Ms. Vosk’s rapturous 90-minute-plus set proves in person why she has deservedly become one of the stage’s favorite musical theater divas.

So, obviously, when Segerstrom Center announced its 2022-2023 Cabaret series line-up and included Vosk as one of the upcoming acts, the prospect of seeing her live on the left coast proved an irresistible notion for many who’ve fangirled from afar. And judging by the packed, raucously appreciative crowd on Opening Night, she’s going to gain a larger So Cal fanbase to add to her followers after this weekend’s shows.

Dressed in an iridescent blue suit, Ms. Vosk entered from the back of the room like an old-school lounge singer and told the crowd “I’m back here!” to get us to look her way. She weaved through the crowd with a beaming smile and some snappy banter as she sang a bouncy “Let Me Entertain You” from GYPSY. Already, she had us mesmerized—and laughing.

One thing you’ll notice right away about Ms. Vosk is that she’s a natural, engaging orator, regaling us with fascinating stories that don’t feel over-rehearsed or memorized—just speaking her truth at the very moment. She has an incomparable, genuine ease about her that made her show, at times, feel more like a talented best friend just giving a little impromptu performance in her living room, holding court by sharing hilarious insider stories, and then slaying with one beautifully-rendered song after another.

That friendly rapport, of course, extends to the people on stage with her. For these concerts at Segerstrom Center, she is joined onstage by her talented musical director/principal accompanist Mary Mitchell Campbell—a frequent presence behind the piano at other solo concerts that have come to Costa Mesa over the decades. Armed with a résumé that name-checks plenty of hit Broadway shows, Ms. Vosk listed off Mitchell Campbell’s impressive credits like a proud mama to her musical director’s adorable, blushing embarrassment.

Ms. Vosk’s friendly banter is also extended to her first special guest for the evening, singer-songwriter Abigail Barlow, who recently won a Grammy Award alongside her writing partner Emily Bear for creating The Unofficial Bridgerton Musical. Later, she showers praise to her guest mini-choir made up of ecstatic high school musical theater students from the Orange County School of the Arts.

If Ms. Vosk’s aim is to keep us laughing and entertained, she definitely achieves this goal. Serving as a tasty buffet of Ms. Vosk’s genre-transcending vocal talents, her first solo show at Segerstrom Center is a fun mix of madcap storytelling and jaw-dropping song interpretations. She came with a memoir’s worth of hilarious recollections and anecdotes that had everyone laughing for extended bursts, while her set list harvests from both theater and pop catalogs—all of which, she expresses, have influenced her own personal tastes as an artist.

She is also, funny enough, an admitted fan of cursing, a fact that has her feigning to ask the audience permission if she’s allowed to utter a few throughout the evening—making her even more endearing, actually.

After finishing “Let Me Entertain You” she then declares that most of the evening’s songs will pay tribute to what she calls “bad ass boss ladies,” garnering loud cheers from he audience. She continues with a playful rendition of Bette Midler’s Beaches version of “I Still Got My Health,” written by Cole Porter, then follows up with a funny story about first meeting Jason Robert Brown, the creator of the BRIDGES OF MADISON COUNTY musical, while stepping in to cover the lead role as a swing in her first Broadway gig.

This story segues to Ms. Vosk’s beautifully melancholy mash-up of Bonnie Raitt’s “I Can’t Make You Love Me” with Brown’s “Still Hurting” from his musical THE LAST FIVE YEARS, the latter she playfully describes as “therapeutic territory.”

Performing in So. Cal. reminded her that one of her wishlist future projects is to record an album paying homage to the songwriters of Laurel Canyon—a collective of singer-songwriter artists that included Jackson Browne, Don Henley, Joni Mitchell, the Mamas and the Papas, Crosby, Stills, and, Nash, and Carole King, which prompts a lovely cover of King’s “So Far Away.”

Like many of her peers, Ms. Vosk also provides teaching workshops for young musical theater students, and a select few of those enthusiastic students she taught from the Orange County School of the Arts are featured as a rousing back up chorus on her cover of Adele’s “Send My Love (To Your New Lover)” and Whitney Houston’s buoyant “I Wanna Dance With Somebody,” the latter of which is sprung on the young singers at the last minute to their shocked surprise.

“I hope you kids know the chorus to this song,” she demands, hoping that this classic 80’s bop is famous enough for these high school kids to know (they did know it and they sounded great).

Once Ms. Vosk announces that it’s about to be her last song of the evening, the audience, understandably, moaned a bit with sadness. She made it such a wonderful evening and no one wanted the fun to end.

She ended the night with two exquisitely-sung covers. First up is Elton John’s “Your Song” followed by thunderous applause and huge standing ovation. For her encore—prefaced by an amusing bit about us pretending she’s walking off stage, but really she’s returning—she sings an almost ASMR-tinged, gentle cover of Sting’s “Fields of Gold” that is the perfect capper to an incredible concert. 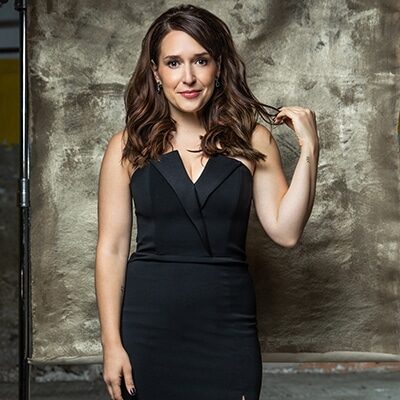