Schumann at the Philharmonic. Robert, Too.

Hasn’t the New York Philharmonic been through enough? Closed for a year and a half by the pandemic, and exiled from its home for renovations during its return season, the orchestra is now at the mercy of visa delays.

Caused by backlogs and staff shortages at embassies and consulates around the world, these delays are plaguing a classical field that depends on the easy travel of musicians from abroad. They kept the Norwegian pianist Leif Ove Andsnes from coming here this week to play; and if one cancellation wasn’t enough, the planned conductor, Jaap van Zweden, the Philharmonic’s music director, also withdrew, because of a family medical emergency.

But when the dust settled, this left an enjoyable double debut with the orchestra at the Rose Theater at Jazz at Lincoln Center on Thursday: the pianist Alessio Bax and the conductor Giancarlo Guerrero.

With the strings often evocatively gauzy, wind solos slicing piquantly through the textures, he and Guerrero conveyed the work’s mercurial swerves of mood without affectation or exaggeration. The lyrical effusions of the second movement were answered with crisp changeability; the finale had a surreally martial undercurrent. The performance was suavely manic, as it should be.

Brahms wrote these works as he was still experimenting with composing for orchestra; revised in the mid-1870s, the score of the 30-minute Serenade No. 2 lacks violins, for a melancholy tinge to the general geniality. Guerrero — the music director of the Nashville Symphony and a grinning presence with expressive fingers and a shiny suit — led a subtly energetic performance, bringing out both the delicacy and the darkness in the third movement and the Schubertian wistfulness in the fourth.

Vivid yet unexaggerated, just like in the Schumann concerto, the playing had the intimate warmth that the orchestra also brought to Haydn’s “Oxford” Symphony in the same space a few weeks ago. It speaks to how successfully the Philharmonic is scaling down to the 1,200-seat Rose Theater, and to two auspicious debuts. 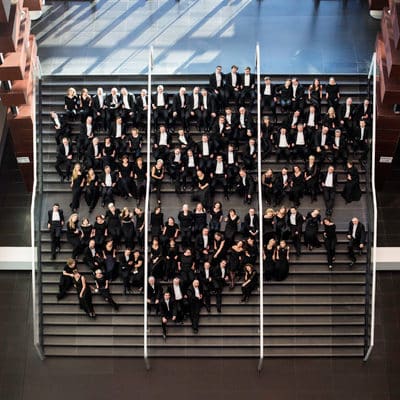