Yo-Yo Ma and the Meaning of Life

From The New York Times Magazine

The immensity of Yo-Yo Ma’s talent is such that he would be globally admired if all he ever did was appear onstage or in a recording studio and then vanish after the last notes faded from his cello. That Ma has instead used his gifts in the service of spreading humanistic values — via cross-cultural musical collaboration, civic engagement and huge amounts of heart — means that his connection with the public goes far deeper than mere admiration. Ma’s compelling instinct for compassion has been on much-needed display during this pandemic year. In the spring, he streamed a performance series, “Songs of Comfort,” on YouTube and social media. During the summer, he broadcast a performance of Bach’s Cello Suites in honor of those lost to Covid-19. And on Dec. 11, he will release “Songs of Comfort and Hope,” an album recorded with the pianist Kathryn Stott. “People need each other for support beyond the immediate staples of life,” Ma says. “They need music.”

Do you think music is fundamentally good?

That’s a good question to ask and very hard to answer. It’s as if you’re asking me “Are people fundamentally good?” I don’t think people are fundamentally bad. But in the interaction of figuring things out or wanting more of something or less of something, then complex things come into play.

I ask because your work is rooted in the idea of music as a value-positive, ennobling thing. But music is also used in every possible awful context. Can we delineate music from the intentions of the people using it?

Music connects human beings. It brings people together. You can also describe it as energy: sound that moves air molecules. So a marching band will energize an athletic game or bring people to war. The bagpipe is used for war, for entertainment, for funerals, for weddings. Music is not one thing. It’s something that people react to. But your question — “Is that good or bad?” — it depends on circumstances and individuals and timing. The invention of something starts out being more or less value-neutral. Agriculture: Nothing bad about it. But if you’re able to grow a lot of vegetables and I can’t grow any on my land, I might want to get some of your vegetables.

Here’s something I’ve been thinking about, particularly over the last four years, and I’ll raise it with you fully aware that my engagement with music is minuscule compared with your own.

Don’t say that. I know you like music. You’re interested. You think about it. So don’t assume I know more than you.

I’ll accept that! All right, I’ve been wondering if in the past I had too easily allowed myself to believe that engaging with music — or culture more generally — was also a way of engaging with politics. In the sense that doing so was implicitly promoting humanistic values or empathy. Now I can’t help thinking that was at least partly a complacent waste of time, and while I was doing that, some parallel Neanderthal was probably spending the equivalent time figuring out how to advance odious politics. Is my rambling making any sense to you?

Of course it makes sense. It’s about whether you believe in a utilitarian world or you believe that if you look out on the night sky, you see the infinitude of variety in nature and the unreachable wonders of what it is and how we fit in. Morons are generally not thinking about the infinitude of the universe. They’re thinking of a different world. And you have to be able to extract certain truths. When you write something that’s beautiful, you think you’ve found a bit of truth. It flows. It sings. You can do that, David. Is that useful? I know the lady who spent 20 years helping to find the so-called God particle, the Higgs boson. Is that useful? I just read this piece that says that Newton, because of the bubonic plague, had to leave university and went back to the family farm, and during that time he developed all these incredible theories that we are the beneficiaries of hundreds of years later. Is that useful?

Physics is useful. Is spending years overvaluing the political utility of art?

All I’m saying is, if you dropped out and just focused on politics, then where are you drawing from? Where are your inner resources? What’s going to keep you going for 50 years? And do you know that you’re actually going to make more of a difference by focusing on politics than on the culture you’re passionate about? You don’t know what you might help make happen. Our world is full of the result of unintended as well as intended consequences. The two naturally go together.

What was your own evolution with music and politics?

I think of it almost in terms of young children and how they engage in the world. Growing up is becoming familiar with a series of rolling concentric circles. You’re kind of circling your space, your home, your family. You’re exploring all around. So to your question, becoming a parent was a huge thing. Once you have a child, your sense of time completely changes. You start thinking about a longer stretch of time, where you have to be responsible for another person’s life. You have to think differently about responsibilities. If you have a parent who becomes ill and you’re there, that’s a familial responsibility. A friend is in trouble; you help the friend. These are extensions of that concentric circle. New neighbors move in; you try to welcome them. It’s all the connections we make in life. Once you’re connected, you feel responsibility. And “connected” means that it’s a circular loop. I know you, but you have to know me, too. There’s an energy circle that goes back and forth.

And you believe culture can drive that?

That’s right. I knew fairly quickly in my career that you had to create memories. In order to have a career, you have to make sure that somebody remembers your name — as opposed to “Oh, that Asian dude who does the violin-type instrument.” It’s about connection. And culture — I used to ask people, “What is culture?” It’s so complex. My latest try for “culture” is that it’s everything that humans have invented that helped us survive and thrive. Think about language, think about agriculture, think about navigation, think about engineering. Think about politics: We invented our nation. And guess what? The people who invented our nation — they were younger than you. That’s my vote for giving custodial responsibility to younger people sooner rather than later. They’re willing to sacrifice certain things in order to have an authentic life in what they buy, whom they buy from, how they live. They’re going to live through moments of change that I know I’m not going to be capable of helping with, but I can be a cheerleader. That’s one way of looking at responsibility. It’s not about: “Oh, I have to care about society. I’m using culture.” It doesn’t need to be defined as “I’m going to play for you this piece of music.” It’s not that. It’s more like you and I talk, and a connection is activated. Because you’re a thoughtful person, I’m going to get something from this conversation that is going to help me build a mental structure: “I met this guy, David, who’s interested in a broad number of people and really does his homework and is a modest person, but he cares a lot and is curious.” That’s a good frame to remember somebody by. That’s important. 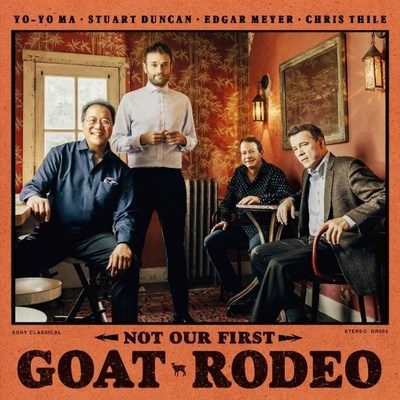 Not Our First Goat Rodeo is out now