“I want people to experience music without borders. My hope is that people will listen with the idea that they’re going to go on a wild adventure,” says Alisa Weilerstein of “FRAGMENTS.” Perhaps her most ambitious and personal project to date, the new series sees her weave together the 36 movements of Bach’s solo cello suites with 27 new commissions, to make six chapters, each an hour long, for solo cello. Under her curation, each chapter embraces a diverse range of compositional voices to trace a powerful and wholly original emotional arc. Performed without the distraction of pauses, applause or program details in a multisensory production by director Elkhanah Pulitzer and artistic producer and advisor Hanako Yamaguchi, with responsive lighting and architectural elements by Seth Reiser and original costumes by Carlos J. Soto, each chapter offers its audience an unmediated, immersive and visceral listening experience. After premiering the first two chapters early next year in Toronto (Jan 28), before giving performances in Southern California (March 10–14) and at New York’s Carnegie Hall (April 1), Weilerstein looks forward to performing and touring all six chapters on both sides of the Atlantic in seasons to come. An initial tour to London, Paris, Brussels, Amsterdam, Berlin, Hamburg, Prague and other major European centers is planned for the 2023-24 season, followed by performances at some of the continent’s most prestigious summer festivals.

Watch a preview of “FRAGMENTS.”

“For me, the Bach suites have always been kind of a journey through life,” says Weilerstein, who is widely recognized as a leading exponent of the composer’s six suites for unaccompanied cello. Her live performances of the suites have been rapturously received on three continents, while her Billboard-bestselling recording of the complete set was nominated for a Gramophone Award. The set was released by Pentatone in 2020, and it was during that same difficult year of lockdowns and concert cancellations that the cellist first conceived of “FRAGMENTS.” She explains:

“I found myself wondering: ‘How are we going to connect with one another when we come back?’ This felt like a chance to rethink the way we experience music. I was also thinking about the ways we could improve our field without throwing the baby out with the bathwater. I didn’t want to sacrifice the quality of our product, but at the same time I’m always trying to think about how to make the tent as big as possible.”

She arrived at the idea of combining Bach’s suites with new music, which allowed her to “celebrate the best of what’s being written today, from the most wonderfully diverse and musically varied group of people.” Ranging in age from 26 to 83, the composers she chose are also diverse with respect to race, gender, geography, compositional approach, musical style and stage of career (see full list below). In a statement about the project, Weilerstein writes:

“I intend for this program to be both a celebration of well-known voices and a way of introducing audiences to young composers or composers whose work has heretofore not been adequately appreciated by the wider public.”

To all 27, she gave the same compositional prompt, asking each to write ten minutes of music in two or three standalone fragments that she could program between other new excerpts or movements by Bach. As she discovered, her prompt elicited a wide variety of musical responses. Where some composers drew inspiration directly from Bach, others explored the possibilities of today’s extended cello techniques. Ranging from the neo-Baroque to the avant-garde, their submissions excited her. “It’s been so fascinating to see what they’ve done with this,” she says. She then took on the task of integrating the new works with Bach’s music to create the six chapters of “FRAGMENTS.” Each chapter is built around one suite in its entirety, but within them she reordered Bach’s movements with the same freedom as the newer works. About her programming process, she recalls: “I was a bit nervous about putting everything in order, because I thought, ‘This has got to be exactly right.’ But when the time came, it just flowed out of me. It was very natural.”

To complete the project, Weilerstein assembled an outstanding creative team under the auspices of artistic producer and advisor Hanako Yamaguchi, the former Director of Music Programming at New York’s Lincoln Center. “FRAGMENTS” is directed by Elkhanah Pulitzer, who has explored the intersection of music and theater in productions for the BBC Symphony Orchestra, New York Philharmonic, San Francisco Opera and other leading performing arts organizations. She explains:

“A nuanced visual design created in close relationship to music can ultimately elevate the form. When objects and music and light are in accord with one another, then some magic can happen that sparks a deeper sensory experience for the audience. When it is part of a live performance by an artist such as Alisa – who generates her own magnetic magic – the result can be a connection to pure feeling.”

“FRAGMENTS” features original costumes by Carlos J. Soto, who has collaborated with artists including Solange, Davóne Tines and Robert Wilson, and sensitive lighting and set design by Seth Reiser, known for his “almost musical sense of lighting” (San Diego Union-Tribune). Reiser says:
“I designed the set by drawing a paneled wall, and then placing rectangles all over it and cutting that wall into several rectangular slices. Within each of the set pieces, there’s a system of LED lights that can respond and change color and be more or less present. I think of the walls as architectural instruments. They’re present in the way a piece of sculpture might be.”

“The staging serves as a way of guiding the audience,” Weilerstein explains. “It’s not narrative theater. It’s abstract, yet very, very emotional.” To maintain this intensity, she performs each chapter from start to finish without pausing for breaks between sections. She is also keen that audiences should be free to create meaning and connection from what they hear without the distraction of background information. “I find I listen much more deeply when I’m allowed to just experience what the composer is actually saying, without worrying about who is saying it,” she says. To that end, instead of receiving program booklets with composers’ names and biographies before each performance, audiences will receive them only at the concert’s end. As Weilerstein puts it:

As for the finished production, she confides: “I was almost in tears seeing it in person for the first time. I thought, ‘Wow. This is not a pipe dream anymore. This is happening.’” 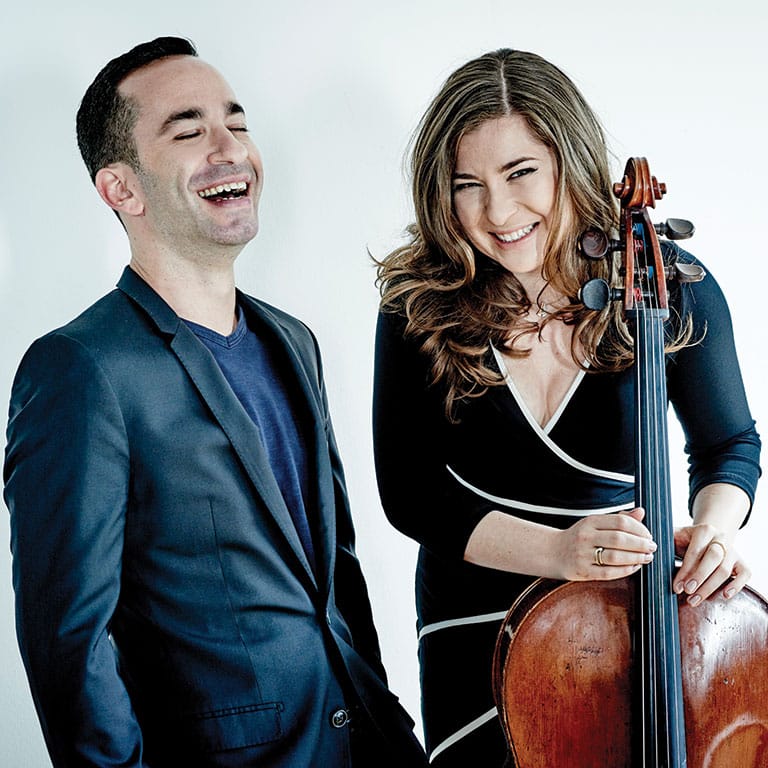