New York Polyphony to Release “And the sun darkened”

GRAMMY-nominated vocal quartet New York Polyphony today announced the release of And the sun darkened, a new album out Friday, March 5, 2021 on BIS Records (BIS-2277 SACD). The album marks a return to form for the ensemble – a 58-minute program of new and ancient works organized around texts appropriate for Passiontide, the last two weeks of the Lenten season in the Roman Rite of the Catholic Church. Champions of rare and rediscovered works of antiquity, New York Polyphony presents the world premiere recording Loyset Compère’s Officium de Cruce, an elaborate, multi-movement motet cycle that rivals the masterpieces of Franco-Flemish contemporaries Pierre de la Rue and Josquin des Prez, both of whom also appear on the album. Additional works include Andrew Smith’s Salme 55, Adrian Willaert’s Pater noster-Ave Maria, and Cyrillus Kreek’s Taaveti laul 22.

Officium de Cruce is an anomaly for its time – a long-form dramatic work likely intended for private devotional use. Composed for Galeazzo Maria Sforza, Duke of Milan from 1466 until his assassination a decade later, it depicts the events of the crucifixion of Jesus. The compositional techniques Compère employed, as well as the work’s overall expressive dimension, foreshadowed the innovations of Adrian Willaert and Nicolas Gombert a generation later. “The dramatic form of Officium de Cruce is, in a sense, a prototype for the madrigal cycles that began to appear in the late 16th century,” explains New York Polyphony countertenor Geoffrey Williams. “It has an expressive arc that is deeply affecting and innovative for composers of Compère’s generation.”

Norwegian composer Andrew Smith’s (b. 1970) affiliation with New York Polyphony dates back to the ensemble’s inception. The music he has composed for the group has occupied such an important place in the group’s repertoire that they consider Smith to be a key factor in the development of their acclaimed sound. “It was through Andrew’s music that we learned to sing as a unit,” notes founding member and bass Craig Phillips. “The format of his harmonic language, its reliance on the contours and colors of Gregorian chant, and how elegantly he sets text taught us how to communicate with each other, balance our timbres, and sing with uniformity of purpose.” Composed for New York Polyphony, Salme 55 is one of Smith’s most ambitious compositions. The text is a lament in which the psalmist prays to God for deliverance from the enemies that surround him, and the friend who has betrayed him. To illustrate the emotional extremes, Smith uses a range of techniques that include complex counterpoint, melodic fragmentation, and tonal ambiguity. The work received its premiere in 2014 at the Church of Saint Jean Baptiste in New York City and has remained a favorite in the repertoire of New York Polyphony ever since.

And the sun darkened follows New York Polyphony’s highly successful 2019 release Lamentationes. A finalist for the 2020 Gramophone Award in Early Music, it topped the iTunes and Billboard charts and was named one of WQXR’s “Best New Classical Recordings of 2019.” BBC Music Magazine praised the album’s “truly affecting and serene uniformity of tone and tuning” and Early Music America wrote, “The repertoire showcases the ensemble performing at its peak. Its approach is persuasive and utterly commanding… a fantastic new album.”

Recognized for the superior sound quality of its recordings, BIS Records is releasing the album as a Hybrid Super Audio CD (SACD). While the disc plays on all standard CD players, it also includes high-resolution stereo as well as surround sound versions of the recording, to be accessed via an SACD player and offering a more immediate and detailed listening experience. For details about New York Polyphony’s previous releases on BIS Records, visit the BIS website.

Even listeners who consider Bach a modernist will likely admire the unnerving beauty of NYP’s interpretations of Smith and Kreek’s works, especially the sheer musicality they bring to the consonant-heavy Estonian lyrics. Brief solos and miniature duets showcase each warm, assured voice, but a collective spirit remains at the heart of this release.”
Early Music America

“There’s a deliberately unshowy quality to the Grammy-nominated quartet’s performances, which prioritise blend and pacing above obvious drama… in this deft performance we feel the weight of the inert body removed from the Cross in the suddenly slow-moving parts, the shouts of the crowd in the hard consonants of ‘Crucifige’.”
Gramophone 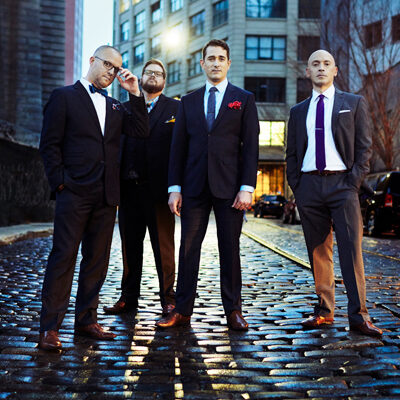