The DiMenna Center for Classical Music

Cellist Gabriel Martins has established himself as one of the world’s most compelling young artists, with a deep commitment to the timeless masterpieces of classical music. His artistry has already been recognized through an extensive list of accolades including the 2020 Concert Artists Guild – Young Classical Artists Trust Grand Prize, the 2020 Sphinx Competition Gold Medal, the David Popper International Cello Competition Gold Medal, the International Tchaikovsky Competition for Young Musicians Silver Medal, among others. These successes have led to a number of high-profile debuts including Wigmore, Carnegie, and Merkin Halls, 92nd Street Y, the Great Hall of the Moscow Conservatory, Maison Symphonique in Montréal, and the Arkansas, Memphis, Indianapolis, New Russian State, Pacific, and Phoenix Symphony Orchestras. His festival appearances include Ravinia’s Steans Music Institute and the Aspen Music Festival, where he won the concerto competition.

In 2022, Martins gave his first complete Beethoven Cycle, with pianist Audrey Vardanega, performing and recording all of the works for Cello and Piano. He is also a prolific composer and arranger. His “Songs of Solitude” received its World Premiere in 2021 in collaboration with the Brooklyn Public Library, and his new cello arrangements of Bach’s Solo Violin Sonatas and Partitas have received high acclaim and a feature in The Strad.

Born of American and Brazilian heritage in 1998, Martins grew up in Bloomington, Indiana. He received his M.M. at the New England Conservatory of Music. He now resides in Massachusetts with his partner, violinist Geneva Lewis, whom he frequently collaborates with as a duo. He plays on a composite Francesco Ruggieri cello made in Cremona, c. 1690 and a François Nicolas Voirin bow made in Paris, c. 1880.

Pianist Wynona Wang was selected as First Prize winner of the 2018 Concert Artists Guild International Competition, which is just the latest in a series of impressive first prize performances, along with the 2017 Wideman International Piano Competition in Louisiana. Wynona was also awarded the 2019 “Charlotte White” Career Grant awarded by the Salon de Virtuosi in New York City.

An active performer in China, Europe and the United States, Wynona’s recent performances include appearances with the Northwest Florida Symphony Orchestra, the Meadows Symphony Orchestra of SMU in Dallas, and such major festivals as PianoTexas, Morningside Music Bridge in Calgary, Canada, the International Keyboard Institute & Festival in New York City, and the Chautauqua Institution.  Internationally, Wynona has been a featured soloist with the Academic Symphony Orchestra of the National Philharmonic Society of Ukraine, and the Romanian Mihail Jora Philharmonic Orchestra in Italy.  She has also given numerous solo piano recitals in China—including cities such as Beijing, Qingdao, Hangzhou, Wuhan, Shenzhen, Kunming, Ningbo, and Dalian—as well as in Spain (Madrid) and Indonesia (Jakarta).

Born in Beijing, Wynona Wang began playing piano at age 4, and went on to study at both the Music Elementary and Secondary schools at the prestigious Central Conservatory of Music (CCOM) in Beijing.  In fall 2016, she was awarded a full scholarship for her Performer’s Diploma at Southern Methodist University in Dallas, and she now lives in New York while pursuing her undergraduate degree at The Juilliard School as a student of Dr. Robert McDonald.

Praised for their “virtuosity, visceral expression, and rare unity of intention”(Boston Globe), the Viano String Quartet are First Prize winners of the 2019 Banff International String Quartet Competition. Formed in 2015 at the Colburn Conservatory of Music in Los Angeles, where they were Ensemble-in-Residence through the 2020-21 season, the quartet has performed in venues such as Wigmore Hall, Place Flagey, Konzerthaus Berlin, and Segerstrom Center for the Arts. The quartet is in residence at the Curtis Institute of Music as well as Meadows School of Music at the Southern Methodist University through the 2022-23 season.

Summer of 2022 brings re-invitations to Great Lakes and Rockport Music Festivals, as well as performances at Chamber Music Northwest (Protégé Project 3-week residency), Tannery Pond under the auspice of Capitol Region Classical, Victoria Summer Music Festival, Bard Music Festival finished with a residency at Banff Centre for Arts and Creativity. In the fall Viano will be making their Lucerne Festival and Wigmore Hall debuts followed by performances in Oklahoma, California, Texas, Florida, Minnesota, New Mexico, New York, Delaware, Tennessee, Washington DC and Canada. March 2023 marks the beginning of their three year residency with Music in the Morning in Vancouver where they will create programming to include artist collaborations, extensive community engagement and masterclasses.

The name “Viano” was created to describe the four individual instruments in a string quartet interacting as one. Each of the four instruments begins with the letter “v”, and like a piano, all four string instruments together play both harmony and melody, creating a unified instrument called the “Viano”.

Pianist and composer Aaron Diehl mystifies listeners with his layered artistry. At once temporal and ethereal, his expression transforms the piano into an orchestral vessel in the spirit of beloved predecessors Ahmad Jamal, Erroll Garner and Jelly Roll Morton. Following three critically-acclaimed leader albums on Mack Avenue Records — and live appearances at historic venues from Jazz at Lincoln Center and The Village Vanguard to New York Philharmonic and the Philharmonie de Paris — the American Pianist Association’s 2011 Cole Porter fellow now focuses his attention on what it means to be present within himself. His forthcoming solo record promises an expansion of that exploration in a setting at once unbound and intimate.

Aaron conjures three-dimensional expansion of melody, counterpoint and movement through time. Rather than choose one sound or another, he invites listeners into the chambered whole of his artistry. Born in Columbus, Ohio, Aaron traveled to New York in 2003, following his success as a finalist in JALC’s Essentially Ellington competition and a subsequent European tour with Wynton Marsalis. His love affair with rub and tension prompted a years-long immersion in distinctive repertoire from Monk and Ravel to Gershwin and William Grant Still. Among other towering figures, Still in particular inspires Aaron’s ongoing curation of Black American composers in his own performance programming, unveiled this past fall at 92nd St. Y.

Aaron holds a Bachelor of Music in Jazz Studies from Juilliard. A licensed pilot, when he’s not at the studio or on the road, he’s likely in the air. 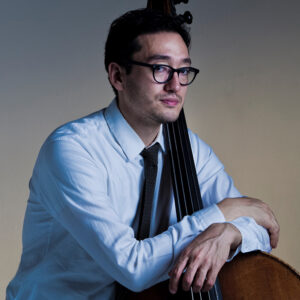 Bassist David Wong was born and raised in New York City. In 2004, he graduated from the Juilliard School in classical music. He has studied with Orin O’Brien (New York Philharmonic), and Ron Carter. He is currently a member of Roy Haynes’ “Fountain of Youth” band, the Charles Mcpherson Quintet and The Vanguard Jazz Orchestra. He was also the last bass player in the Heath Brother’s Quartet led by Jimmy Heath and Albert “Tootie” Heath as well as Hank Jones’ “Great Jazz Trio” and is featured on the piano master’s last recording.

David is on faculty at Temple University, Purchase College, The New School and The City College of New York.