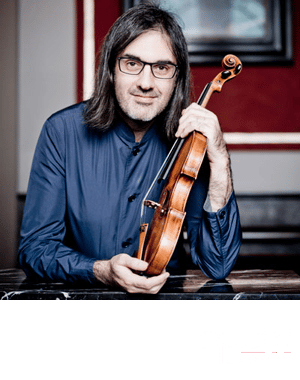 “The playing is the thing, and it is ­spectacular. ­Kavakos’ virtuosity is stunning but not showy. He tosses off the most hair-raising ­pyrotechnics and sound effects…with ease and relish.”

“Kavakos ranks among the greatest ­instrumentalists of our time.”

“With a big, rich, gleaming tone, Kavakos had all the ardor and virtuosity one could wish…”

“Kavakos’ violin playing has always been astoundingly ­virtuosic and blazingly ­insightful… I’m happy to admit Kavakos to the pantheon of musician-philosophers.”

“The highlight of the afternoon was Bartók’s ­Second ­Violin Concerto, which got a ­masterful ­performance from the Greek violinist Leonidas Kavakos. His ­technique is immaculate: he ­navigated all of the concerto’s virtuoso hurdles without too much apparent effort. Even more impressive were the lucid, singing tone of his playing and his elegant phrasing.”

“In a striking and original interpretation of the ­Sibelius Violin Concerto with the San Francisco ­Symphony, ­Kavakos stripped this extravagant work of all ­indulgences to deliver a lean, ­purposeful, and deeply ­absorbing ­performance.  The sense that something ­different was about to happen was apparent right away.  From a ­quietly insistent opening phrase to an early ­cadenza, Kavakos staked out his territory with a woody, fibrous tone – reminiscent of a fine baritone’s probing, amber-toned voice – that seemed to stride into the score instead of sailing across its swooping surfaces.”

“…time and time again, he juiced out rivulets of sound from just a couple inches of bow. Like any Brahms interpretation worth its salt, his performance leaned into the work’s inherent narrativity. In the first movement, he wound out of the finger-tying cadenza with genial windedness, as though acknowledging the hugeness of the disclosure just before.”

Leonidas Kavakos is recognized across the world as a violinist and artist of rare quality, acclaimed for his matchless technique, his captivating artistry and his superb musicianship, and the integrity of his playing. He works regularly with the world’s greatest orchestras and conductors and plays as recitalist in the world’s premier recital halls and festivals.

In the 22/23 season, Kavakos is honored as Artist in Residence at Orquesta y Coro Nacionales de España, where he will appear as both violinist and conductor across the season. He will tour Europe with Yuja Wang, as well as return to the US with regular recital partners Emanuel Ax and Yo-Yo Ma. Kavakos will perform a number of concerts throughout Europe and the Middle East with the Royal Concertgebouw Orchestra and Daniel Harding, as well as return to the Vienna Philharmonic, Bayerischen Rundfunks Symphony Orchestra, Deutsches Symphonie-Orchester Berlin, Orchestre Philharmonique de Radio France, NDR Hamburg, the New York Philharmonic and the Czech Philharmonic. He will also conduct the Danish National Symphony Orchestra, RAI Torino and the Minnesota Orchestra. He has two extensive visits to Asia, including a residency at Tongyeong International Music Festival, in addition to a series of recitals in Japan and South Korea where he will perform Bach’s Partitas and Sonatas, following the release of his critically acclaimed album ‘Bach: Sei Solo’ in 2022.

Kavakos is an exclusive recording artist with Sony Classics. Further recent releases from the Beethoven 250th Anniversary year include the Beethoven Violin Concerto which he conducted and played with the Bavarian Radio Symphony, and the rerelease of his 2007 recording of the complete Beethoven Sonatas with Enrico Pace, for which he was named Echo Klassik Instrumentalist of the year. In 2022 Kavakos released ‘Beethoven for Three: Symphonies Nos. 2 and 5’ arranged for trio, with Emanuel Ax and Yo-Yo Ma. The second album from this series containing further arrangements of Beethoven Symphonies will be released in Autumn 2022.

Born and brought up in a musical family in Athens, Kavakos curates an annual violin and chamber-music masterclass in Athens, which attracts violinists and ensembles from all over the world. He plays the ‘Willemotte’ Stradivarius violin of 1734.